Tigers fall to the Packers, but not without a fight 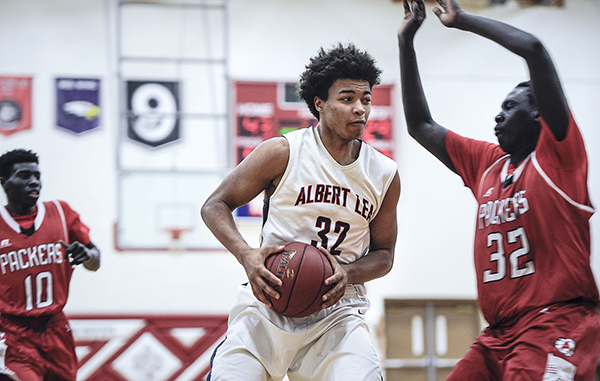 In sports, stats and scores don’t always reflect a team’s attitude or level of effort. If they did, the Tigers’ stats would be off the charts. 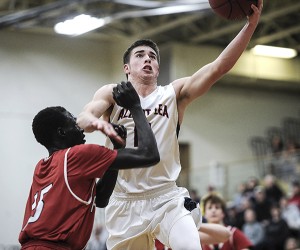 Albert Lea’s Jake Kilby goes over Austin’s Both Gach for a layup in the first half Friday night in Austin’s Packer Gym. – Eric Johnson/Albert Lea Tribune

The conference matchup came a day after what Albert Lea coach Stan Thompson called a “heartbreaker” of a loss to Stewartville, in which Albert Lea lost 46-44 in a controversial buzzer beater that has been under some debate. Thompson said beforehand he wasn’t sure what to expect from his players morale-wise.

He was pleasantly surprised, to say the least.

“They played their hearts out,” he said. “They did exactly what they’ve done every game.”

Against a team that Thompson said he considers to be one of the best in the state, the Tigers only trailed by eight points at halftime.

“We were with them the whole first half,” he said. “They gave 100 percent and kept coming back. … It wasn’t a blowout — we were there.”

The entire team had something to be proud of Friday, Thompson said.

“Everybody on the team gave 100 percent,” he said. “If they were on the court, they gave everything they could give.”

He recalled sitting on the bench at one point, looking at his assistant caches, and saying “We just don’t quit.”

“I was really proud of the way they fought back after the heartbreak,” Thompson said. “It really helped me to see that they’re never going to quit.”