In 1988, Grace Haukoos opened The Constant Reader, an independent bookstore on South Broadway in Albert Lea, and “very shortly afterwards,” as Grace recalls, she hired Trudy Banks away from another bookstore, “the one up on Skyline,” to work for her. 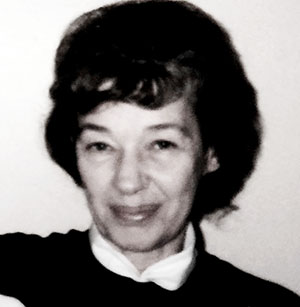 The Constant Reader was open for 18 years, and Trudy “hung on to the bitter end,” Grace recalls. “Trudy was a lifelong reader and promoter and talker about books. She introduced hundreds of people to good books. She always had a good recommendation for them, and she was known for always remembering what had people read and for knowing what they liked.

“She translated her love for books into a life of helping other people love them, too.”

Pat Amundson, one of her co-workers at A Constant Reader, also kept in touch with Trudy after the store closed.

“I was her friend for over 30 years,” Pat wrote, “We used to sit on the phone for hours talking and laughing about everything in the world. I’m going to miss our conversations.”

Trudy Banks was born Marion Gloria Lestina to Emil “Mike” and Dorothy Lestina on July 4, 1943, in Minneapolis. No one in the family could ever recall anyone calling her by her given name. Her maternal grandfather, Joe Piker, nicknamed her Trudy and it stuck.

The Lestinas lived in the southeast section of Minneapolis. Trudy attended Marshall High School and was a member of the class of 1961. After a series of jobs and relocations, she returned to Minnesota, where she worked selling shoes at Donaldson’s department store — which is where she met Charles “Chuck” Pike, whom she married in 1965. In 1966, the Pikes moved to Albert Lea, where Chuck was the credit manager at Naeve Hospital. The Pikes soon purchased a house on an acre of land in Glenville.

Their son, Doug, was born in 1969. Although they remained lifelong friends until Chuck’s death in 2009, the Pikes divorced in the early 1980s. Trudy remained in the house in Glenville after her later marriage to Bill Banks, who died in 2011.

As was her mother, Dorothy, and her grandmother, Nettie Piker, before her, Trudy was an accomplished and prolific baker. (Nettie was the personal baker to the Pillsbury family). She was also a crackerjack word game player, a generous friend and neighbor and a proud (but somewhat bizarre) extreme couponer.

This past Thanksgiving, in a last Facebook message exchange with her brother, Trudy wrote: “You know, everyone has their own picture of ‘heaven.’ Mine happens to be earth in the here and now on my little acre with trees and critters and seasons and not being overwhelmed with packs of people. There is magic in the simple things if people would only allow themselves to see it.”

Trudy’s friends request that she be memorialized by either books or monetary donations in her name to the Albert Lea Public Library.

A memorial service for Trudy Banks will take place in the spring and will be announced in advance in the Tribune.