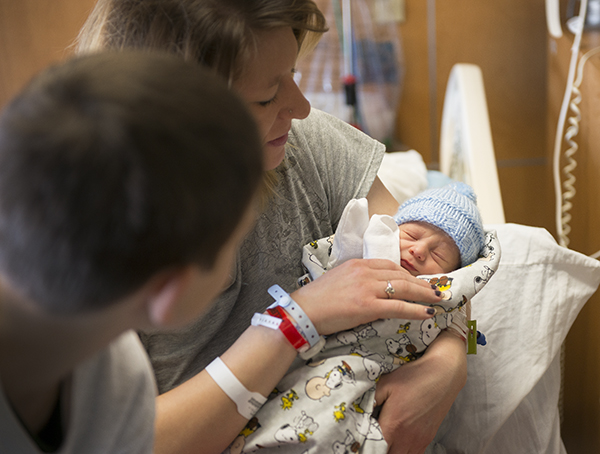 Born to Jenny VanGerpen and Aaron Bromeland, the baby weighed 6 pounds, 3 1/2 ounces and was 18 1/2 inches long.

Odin Mark Bromeland was born at about noon on New Year’s Day in The Baby Place in Mayo Clinic Health System in Albert Lea, six days before his due date of Jan. 7. He was delivered by obstetrician Jodi Schulz. 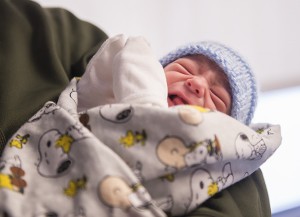 Bromeland said VanGerpen had been having Braxton Hicks contractions since she was six months pregnant, but had woken up with more serious contractions at about 4:30 a.m. Friday.

The couple had called into the hospital the night before, and Schulz was on call to deliver the baby.

VanGerpen said she delivered the baby naturally, calling it a relatively “quick delivery.”

“He was born with his eyes wide open,” his father said.

The baby has dark brown hair and deep blue eyes.

Bromeland said the baby thus far likes to be held and has been sleeping a lot. The father said he hasn’t been too fussy yet.

“We’re pretty thankful, and we feel pretty blessed that he’s here,” he said.

Bromeland, who works at Lou-Rich, and VanGerpen, who works at St. John’s Lutheran Community as a certified nursing assistant, have another son, Brody, who is 8.

The older brother was visiting the hospital Saturday and said he has been excited to meet his new brother. Some family had already visited, and others were expected to come over the weekend.

The couple received a basket full of baby items, along with flowers and a balloon, from the nurses at The Baby Place. 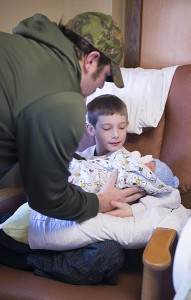 The couple said it was a nice surprise and thanked the nurses for their help.

Mother and baby were scheduled to come home from the hospital on Sunday.

VanGerpen said she planned to take some time off work to be with the new baby.