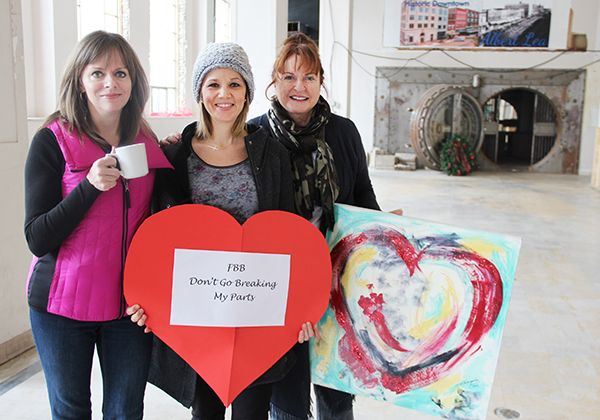 Called “Love is in the Air,” the event will start at 5 p.m. Feb. 13 at the Freeborn National Bank building and The Interchange Wine & Coffee Bistro downtown. 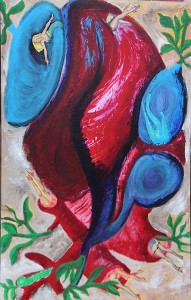 All of the art on display during the Albert Lea Art Center’s “Art With Heart” exhibit will feature art with red, hearts or something that evokes passion. This piece is by artist Carli Bailey. – Sarah Stultz/Albert Lea Tribune

Marty Shepard, artistic director with the Albert Lea Art Center, said the event came about after representatives from the Art Center, The Interchange and the city of Albert Lea’s Historic Preservation Commission found out they were all planning events for the Valentine’s Day holiday.

“So we all got together to plan one event,” Shepard said.

“Love is in the Air” will feature the Art Center’s new “Art with Heart” exhibit in the bank building, which features art with red, hearts or anything that evokes passion, Shepard said.

There is no cover charge to attend, and there will be many door prizes.

A special sweethearts menu will be available at The Interchange, and co-owner Lisa Hanson said reservations are encouraged.

“Everybody goes out on Valentine’s Day,” Shepard said. “I can’t think of any other place that will be as much fun.”

The effort is part of a campaign through the Preservation Alliance of Minnesota termed heart bombing.

The campaign is taking place across the state throughout the month of February and particularly the week of Valentine’s Day. 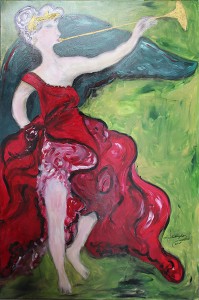 This piece by Marty Shepard is one of several that will be on display as part of the Albert Lea Art Center’s “Art with Heart” exhibit during the “Love is in the Air event Feb. 13. – Sarah Stultz/Albert Lea Tribune

Nelson said she plans on gathering some memories of the building from some of the residents of Bancroft Creek Estates to include in the demonstration.

The valentines will be put up both on the exterior and interior of the building.

If people want to make valentines but are unable to attend the Feb. 13 event, they should contact Nelson at 377-4340.

After “Love is in the Air,” the Art Center exhibit will be moved back to the Art Center, 226 W. Clark St. to be shown for about a month.