Funeral services for Willard F. Perleberg, 90, will be at 1:30 p.m. Wednesday at Bethlehem Lutheran Church in Myrtle. The Rev. David Efflandt will officiate. Interment will be in Pilgrim’s Rest Cemetery. Visitation will be from 5 to 7 p.m. Tuesday at Bayview/Freeborn Funeral Home and one hour prior to the service at the church. Online condolences are welcome at www.bayviewfuneral.com. 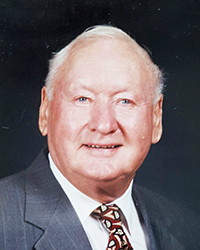 Willard F. Perleberg was born on Dec. 6, 1925, in London Township, the son of Martin and Martha (Hensel) Perleberg. He went to country school and then began farming with his family. Jack met his future wife, Charlene Clasen, through mutual friends. They were united in marriage on Jan. 7, 1950, in Hope Evangelical Lutheran Church in Chicago. A life-long farmer, Jack was a member of Bethlehem Lutheran Church and London Conservation Club. He played softball and dartball through the church league, coached girls’ softball and was a member of the Freeborn County Softball Hall of Fame. Jack was an avid snowmobiler and belonged to the Lords of London Snowmobile Club. He liked fishing, hunting and traveling — enjoying trips up North for deer hunting.

Jack was preceded in death by his wife, Charlene; daughter, Diane; parents; brothers; sisters; and nieces and nephews.