A.L. man in Washington, D.C., for work gets chance to be part of event for Scalia 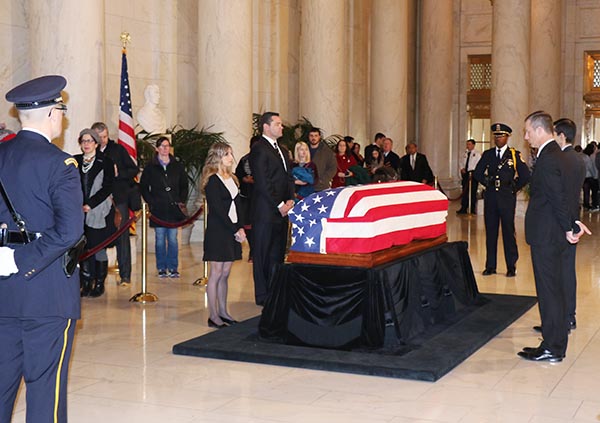 An Albert Lea man’s mishap gave him the chance to witness a part of history last week in Washington, D.C., at the public viewing of the late U.S. Supreme Court Justice Antonin Scalia.

Bryce Gaudian said he was in the city for his job as development manager at Agilis Co. to attend a convention for the Direct Marketing Association Nonprofit Federation.

Gaudian said he initially didn’t think he would have time to stand in a line of thousands of people at the Great Hall of the Supreme Court for the viewing on Friday, so he walked at least one mile from his hotel to the building on Thursday afternoon to take some photos. 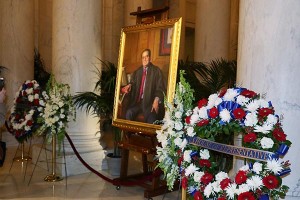 Flowers given by the U.S. House of Representatives and the Senate on Friday sit near a painting of the late Supreme Court Justice Antonin Scalia in The Great Hall of the Supreme Court. -Provided

His plans, however, quickly changed after he lost his credit card while out on an early-morning run on Friday with some others to the Lincoln Memorial and Washington Monument. He had planned to buy the others coffee after their run, and said he thinks the card must have fallen out when he took his phone out at both places to take photos.

After calling to report the loss, he said he was told on the phone that the card had been turned into Capitol police, and they were holding it for him. A policeman reportedly found it on the west lawn of the Capitol.

Gaudian said though it seemed impossible — as he had run the opposite direction — he walked to the Capitol to retrieve the card and was escorted through what he described as a “maze of underground tunnels and passageways deep under our nation’s capital.”

The Capitol is across the street from the Supreme Court building, so a security officer took him into the closest access door to the Supreme Court. He went to wait in line to gain access to the Great Hall, where Scalia was lying in repose.

Gaudian said it was early enough that there were not thousands in line.

He said he was ultimately interviewed by three different news outlets, including The Daily Signal, “PBS Newshour” and “The Voice of America.”

“It was one of those rare moments in history to be inside the Great Hall of the Supreme Court to view Justice Scalia’s coffin and see the flowers from the House of Representatives and the Senate, as well as the throngs of the people waiting to gain access — some citizens holding signs and contending for various causes dear to them, a man blasting preaching over two megaphones from across the sidewalk, news teams from all over the world with larger zoom lenses than I’d ever seen,” Gaudian wrote in an email.

He said if he had not lost his credit card, and it had not been found on the Capitol lawn — which is still a mystery to him — then he would not have had the experience.

Scalia served on the Supreme Court for nearly 30 years. A funeral Mass was on Saturday at the Basilica of the National Shrine of the Immaculate Conception in Washington, D.C.