An Albert Lea man is facing prison time after he was allegedly found walking on Interstate 90 early Wednesday morning with more than 16 grams of methamphetamine. 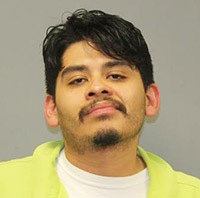 According to court documents, Freeborn County Sheriff’s Office deputies responded to a call for assistance at 3:25 a.m. regarding a person walking on I-90 in eastern Freeborn County.

Upon arrival, the deputies reportedly found Velez walking west on the interstate. After a deputy asked what his name was and Velez responded, he was arrested on a warrant.

Deputies found a baggie with a white crystal substance in his left jacket pocket, which reportedly later field tested positive as methamphetamine and weighed approximately 16.4 grams.

Velez’s next court appearance is scheduled for March 10.

Second-degree possession of methamphetamine carries a maximum penalty of 25 years in prison and a $500,000 fine.