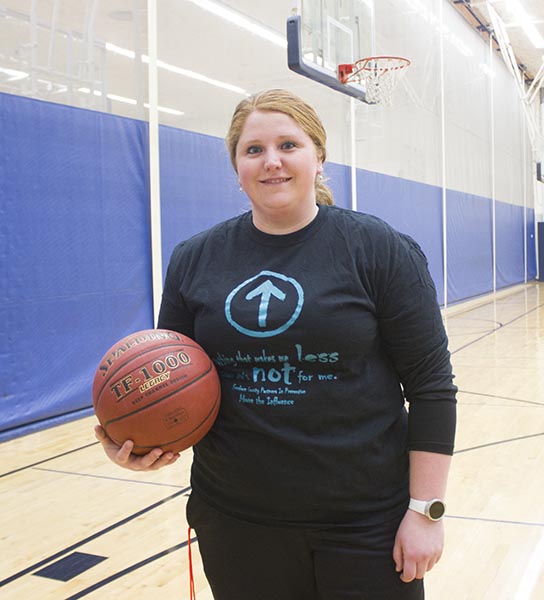 An Albert Lea native has returned to her hometown and is making a difference in the everyday lives of area youth.

Lana Howe, 23, is the program coordinator for Freeborn County Partners in Prevention.

In her position, Howe aims to prevent drug use among students and keep them safe, happy and healthy by education.

Under Howe’s leadership, Freeborn County Partners in Prevention is partnering with the Albert Lea Family Y on an after-school program at Southwest Middle School that aims to build children’s core values.

Partners in Prevention has purchased a system for the Albert Lea Police Department that educates students on the dangers of distracted and drunken driving.

Howe spoke to a 10th-grade health class at Alden-Conger School earlier this year about drug trends and ways to seek treatment if they or someone else they know is struggling with drug addiction.

Howe gave a presentation with different questions pertaining to drug prevention. Students were given treats for answering questions correctly.

She spoke to the Albert Lea Area Schools board and has partnered with the district on a flier with drug use statistics and prevention tips. She plans on distributing the fliers across the county, in event programs and in hallways.

Last year, Partners in  Prevention simulated a mock crash that the organization looks to conduct every three to five years to educate students on safety during prom.

After attaining her four-year degree in three years, Howe was an intern for three months in Homer, Alaska, before moving back to Albert Lea, a decision she said she doesn’t regret.

Prior to working with Partners in Prevention, Howe was a program coordinator for Martin, Steele and Freeborn County 4-H.

Howe looks at her position as crucial to student lives, and said her being there is important to anyone who is struggling or knows someone who is.

Howe is an eighth-grade basketball coach in Albert Lea and said in doing so she is able to share her drug prevention and health and wellness message. She said coaching the team allows her to be there for her brother, Logan, who is on the team.

She said though she’s lived in several places, Albert Lea and the surrounding area is still unique.

“I never had the feeling of community that I get from here, from Albert Lea and from Freeborn County,” she said.