Albert Lea woman speaks out about murder in Minneapolis suburb

The sister of the Plymouth woman who died Friday after she was reportedly killed by her fiancé is hoping to raise awareness of the warning signs of domestic violence.

Trisha Nelson, 28, was a 2005 Alden-Conger High School graduate and had been with her boyfriend, Corey Perry, for six or seven years before Perry allegedly shot at her Friday and then ran her down at a busy intersection in the Minneapolis suburb of Plymouth.

Police said Nelson appeared to be a victim of domestic violence, and it was unclear whether she had fled the vehicle or was pushed from it. 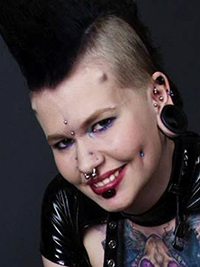 Perry reportedly died in an exchange of gunfire with police later that evening.

“If we can save one family from going through the nightmare that these last few days have been,” said Albert Lea resident Tanya Fure, one of Nelson’s sisters.

Fure said Nelson had moved up to the Twin Cities because she loved the culture there and had recently been promoted to supervisor at her job at Caterpillar Inc.

Nelson, the daughter of Clay Nelson of Alden and Marilyn Nelson of Albert Lea, had a big heart and loved anybody and everybody and liked piercings and tattoos, as well as dying her hair, her sister said. She was also active in a rescue for abused iguanas.

“Those tattoos were her form of art,” Fure said.

She said family and friends are still piecing together information about Nelson and Perry’s relationship.

“We never really knew how violent it was until some of her friends have told us,” Fure said.

She described Perry as being controlling and said the behavior most likely progressed from there.

Fure encouraged people who may be in a relationship involving domestic violence to seek help early.

“No one ever expects that the person they love is going to end their life,” she said. “They love them. They have blinders on.”

Perry’s lawyer, Michael Padden, said in an Associated Press article that his client had a history of untreated mental illness.

Padden was handling Perry’s appeal after he was convicted of carrying a weapon while intoxicated and making terroristic threats in an incident that stemmed from a bar fight in Hopkins.

The lawyer said Perry had been drinking Friday night when he got into an argument with a valet and became fearful of getting in trouble again. He called Nelson to pick him up.

“He had a perception the police were after him because getting in a fight and consuming alcohol would be a violation of his probation,” Padden said.

Oral arguments in Perry’s appeal were set for later this month.

Fure said anyone in a relationship with domestic violence can seek help through the Minnesota Coalition for Battered Women’s hotline at 866-223-1111.

Nelson’s funeral arrangements have not yet been announced. The family has set up a GoFundMe account to raise money for funeral expenses.