A memorial service for Ann V. Paczkowski will be at 10 a.m. Saturday at Grace Lutheran Church in Albert Lea. The Rev. Janet White will officiate. Visitation will take place one hour prior to the service at the church. Interment will be held at Graceland Cemetery following the service. 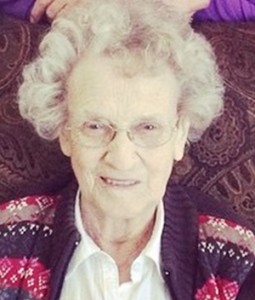 Ann Verona (Sondrol) was born March 10, 1923, to Clarence and Selma (Singelstad) Sondrol in Emmons. She attended and graduated from Emmons High School. On Aug. 11, 1943, she was united in marriage to Conrad Paczkowski at St. Theodore Catholic Church in Albert Lea.  The couple called Albert Lea home. She worked as a stay- at-home mother, but also spent time waitressing at Maid Rite in Albert Lea. Conrad passed away in 2007, and Ann moved to Kasson to be closer to some of her family. She was a member of Grace Lutheran Church in Albert Lea, as well as St. John’s Lutheran Church in Kasson.

In her free time Ann enjoyed crocheting, crossword puzzles, card games and bingo, and watching sports. She was a fun-loving, kind person who enjoyed conversation and coffee time with her friends. Time spent with family was very important to her and she cherished the moments she spent with them.

She is preceded in death by her parents; spouse, Conrad; two sons, Don and Robert; and siblings Donald Sondrol and Norma Schaumburg.

Those left to carry on her legacy include her children Charles Paczkowski and his special friend, Liz Eulbreg, of Albert Lea, Joseph (Eva) Paczkowski of Burnsville, Jean (Steve) Weitzel of Kasson and James (Gioia) Paczkowski of Blythewood, South Carolina; 16 grandchildren; 31 great-grandchildren; brother, Charles Sondrol, of Story City, Iowa; as well as many other loving relatives and friends.