At ‘Prairie Home,’ Garrison Keillor successor stands on the edge of something exciting 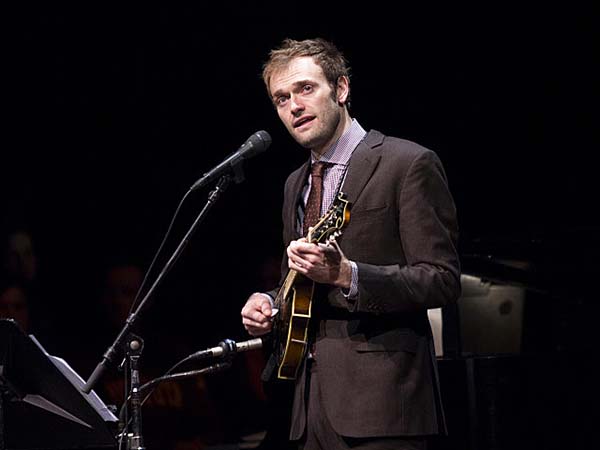 For someone about to assume the mantle of host of the biggest franchise in public radio, mandolin master Chris Thile seems remarkably calm.

As you may have heard, Garrison Keillor chose Thile to become the new host of “A Prairie Home Companion.” On Saturday night, Thile, known to fans as a member of the bands Nickle Creek and Punch Brothers, hosts the show solo for the second time this season.

He is a coiled spring of a guy with a huge grin, despite grappling with a big new job.

“It’s remarkably thrilling,” he said. “I can only hope to convey how stimulating those two hours on air are.”

Thile credits the Prairie Home staff with having his back as the show goes on. That it sounds laid back is the result of hard work by people off stage.

“It’s true, it runs like a fine but frenzied Swiss watch,” he said. “Some Swiss watch that has had its fair share of coffee that day.”

Keeping within the bounds of a live radio show means time has taken on a different significance for Chris Thile. As the band comes on for a warm-up just before air, it finds two clocks: one counting up, and the other counting down to airtime.

“Starting in 15 minutes, and it just goes down and down and down,” he said. “And you know you are going to hear, what is it? The third movement of Bach’s Sixth Brandenburg Concerto? And then you are on.

“And Rich (Dworsky) kicks into the ‘Tishomingo’ theme song and you start singing, and I think that helps, because I love singing that song. And it’s this very comfortable, easy as Sunday morning there on Saturday night kind of song. And Rich kicks into that song and I feel like the show is happening, so all I really have to do is get out of its way.”

“I grew up with the show, and to a certain extent on the show. I think I played it first when I was 14,” he continued. “The show means a great deal to me, as it does to so many people. So I take this opportunity, this job, immensely seriously and with great awe.”

Thile spoke about the template Garrison Keillor created with “A Prairie Home Companion,” and the possibilities it brings. He said the show allows people to escape from the cares of the day, while conversely allowing the opportunity to take a step back to examine those cares. He’s honored and excited to be given the template, but knows he’ll have to fill it.

“I feel that Garrison has created something along the lines of Tolkien’s Middle Earth or Debussy’s solo piano repertoire, or something like that — these worlds that we are invited to inhabit, just poke around in, like if they were ‘The Legend of Zelda’ video game. We just roam around.

“For Garrison, we have been roaming around in Lake Wobegon for these last 40 years, and I won’t have Wobegon, because woe to him that tries to tell that story after Garrison Keillor has told it. And I fully expect Garrison to keep telling us that story. But we will find new ways to tell stories and to make worlds for people to roam around in.”

Thile is already creating those worlds. This weekend, Paul Simon and Andrew Bird will join him for the show, and maybe even play together.

“It’s looking good,” he said with a grin. “Looking good for some collaborative activity.”

The show is sold out, other than rush tickets, but it will be video-streamed live. Thile will co-host with Keillor later in the season, and then there’s a lot of planning to do. There aren’t many details as yet, but for Chris Thile, there’s a whole lot of excitement.