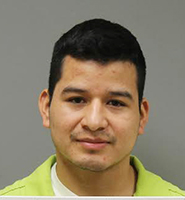 Alverez-Agular was originally charged with the first-degree count plus one count of third-degree criminal sexual conduct and one count of domestic assault by strangulation, but those charges were dismissed with a plea deal.

Under the plea agreement, Alverez-Agular faces a presumptive sentence of 12 years in prison.

The charges are in connection to the sexual assault of a woman June 28 at a residence in Albert Lea.

According to court documents, when police responded to the house, the woman reportedly claimed that Alverez-Agular had come to the residence that afternoon and had forced his way into the house.

Reports state Alverez-Agular sexually assaulted her, strangled her and beat her with wooden drum sticks.

Alverez-Agular was known to the victim.

Medical personnel reportedly observed scratches and bruising on the victim.

Sentencing is scheduled for May 12.

Alverez-Agular faces a maximum sentence of 30 years in prison and a $40,000 fine.