Funeral services for Bernetta Hanson of Albert Lea will be at 11 a.m. Tuesday at Zion Lutheran Church in Albert Lea. The Rev. Robert Bailey will officiate. Interment will be in Geneva Cemetery. Visitation will be from 6 to 7:30 p.m. Monday at Bonnerup Funeral Service and one hour before the service at the church. 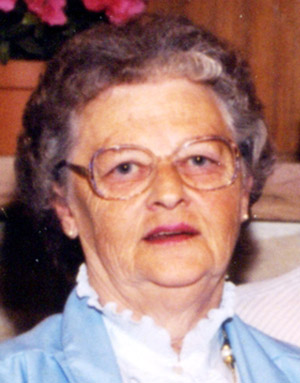 She was born April 7, 1932, near Ellendale, the daughter of Albert and Helen (Brynestad) Sorenson.

She attended rural Ellendale schools. On May 26, 1948, she married Lyle W. Hanson at Our Savior’s Lutheran Church in Albert Lea. They made their home in Hollandale.

Bernetta enjoyed making her house a home and taking care of her family. Some of her favorite things include sewing, playing bingo, planting flowers, going for coffee and she loved her sweets — especially ice cream and Reese’s peanut butter cups.

She was preceded in death by her parents; her husband, Lyle; her daughter, Linda Witter; her grandson, Scott Witter; and siblings Marlys, Howard, Louella, Donny and Muriel.