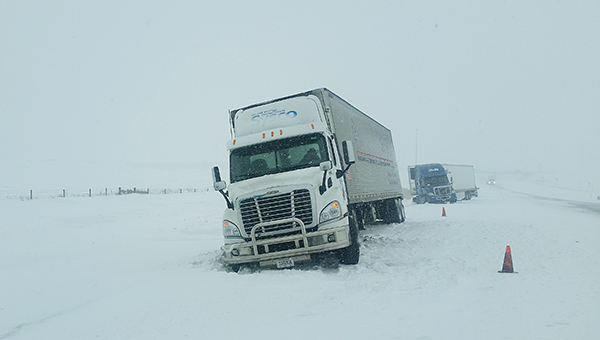 Albert Lea residents are digging out from a powerful storm this morning that dropped 6 inches of snow and led to the closure of Interstate 90 west of the city.

Interstate 90 was expected to re-open shortly after the Tribune’s press time, according to Freeborn County Sheriff Kurt Freitag. Blowing snow was expected to continue through the morning, leading to dangerous travel conditions.

A winter weather advisory was in effect until noon because of the blowing snow. Northwest winds of 20 to 25 mph with gusts near 30 mph were expected.

Albert Lea and the surrounding area were in a blizzard warning through 6 a.m. today as wind and snow reduced visibilities to less than a quarter of a mile, creating whiteout conditions. 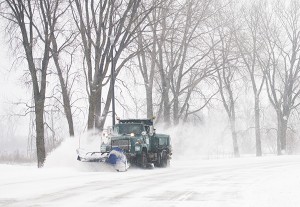 A snow plow clears a roadway near Frank Hall Park Tuesday as the area had to dig itself out of 6 inches of snow that fell throughout the morning and afternoon. – Colleen Harrison/Albert Lea Tribune

According to Albert Lea Police Department and Freeborn County Sheriff’s Office logs, there were seven no-injury crashes reported  and seven instances reported of people getting stuck in snow.

There were additional crashes and reports of people in ditches on the interstates.

The Minnesota State Patrol reported hundreds of crashes statewide as the winter storm pushed across the state.

As of this morning the patrol reported more than 400 crashes across Minnesota, along with hundreds of spinouts.

Freitag asked that residents not travel from 5:30 p.m. Tuesday through 6:30 a.m. today because of the conditions of the county roads. He said county plows were pulled from the roads at 4:30 p.m. Tuesday.

Snow removal crews started anew this morning, while the Department of Transportation urged drivers to allow extra time to reach their destinations.

The National Weather Service was promising some sunshine later today.