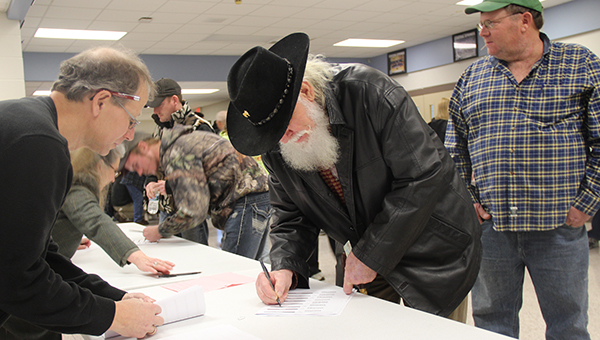 MANLY, Iowa — Worth and Winnebago county caucus-goers selected Ted Cruz as their top Republican candidate and Bernie Sanders as their top Democratic candidate on Monday in Iowa’s presidential caucuses.

Cruz, a U.S. senator from Texas, won with a little over 30 percent of votes in both counties.

Second in Worth County for the Republicans was presidential hopeful Donald Trump, who lost by only two votes. Marco Rubio was third with about 14.7 percent of votes.

Across the state Cruz won with 28 percent of votes, followed by Trump with 24 percent and Rubio with 23 percent.

Sanders, a former Congressman, won 57.5 percent of Democratic votes in Winnebago County and 54.7 percent in Worth County against former U.S. Secretary of State Hillary Clinton.

The Democratic Worth County caucuses were held in Northwood at Northwood-Kensett Elementary School.

Worth County Republican caucus Chairman Jeff Gorball said there was a record number of people in attendance at Central Springs High School in Manly, where the Republican caucuses were held.

“It’s the excitement that’s been generated by the candidates,” Gorball said of the higher-than-normal turnout. “It has raised people’s passions.”

The turnout of more than 370 people in Manly was more than double the county’s previous record for a caucus. Gorball said in 2012, the caucus had about a dozen new-registration cards. In contrast, on Monday night people in attendance went through at least 75 new registrations.

Jack VanHorn, 75, of Northwood said he had never attended a caucus until Monday night.

His wife, Diane, said she thought she knew who she was going to vote for going into the evening and noted that she is frustrated with the tone the race has taken.

Char Gordon and her husband, Dan, of Grafton said they, too, were first-time attendees. They came out as campaign managers for Dan Fank, who is running as a Republican for Worth County sheriff, but they were interested in the presidential race as well.

“I’m still undecided,” Char Gordon said about which candidate she would vote for before the caucuses began. “I like little bits of everybody, so it’s going to be hard to choose.”

Dianne Yezek of Manly said she came out to show her support for retired neurosurgeon Ben Carson.

A former Democrat, she said she switched parties.

“He’s not a politician,” Yezek said of Carson. “He’s an honest individual.”

She said Carson has a plan for every issue that the country faces.

She, too, had never attended a caucus before, noting she used to be a big Barack Obama supporter.

“I never felt the need because I felt he had the support,” Yezek said of Obama.

Representatives for each candidate had the chance to speak in front of the county residents for each party. After that, the group split up into precincts, where people ultimately could cast their ballots.

Iowa is the first state in the nation to have its caucuses, and many candidates have stopped in northern Iowa in the last few weeks to meet with as many people as possible. 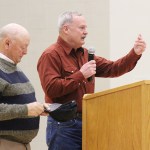 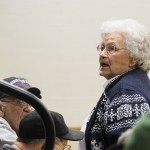 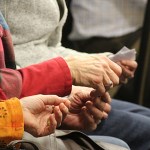 People pass ballots in on Monday night during a Worth County Republican caucus in Manly. Sarah Stultz/Albert Lea Tribune 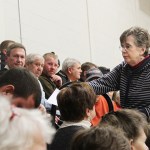 At least one of the Worth County Republican precincts ran out of prepared ballots on Monday. The group made do with some notepad paper. — Sarah Stultz/Albert Lea Tribune 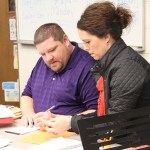 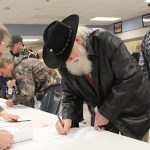