Memorial services for Claude “Sparky” Gore, 90, of Mason City will be at 2 p.m. Saturday at First Lutheran Church in Glenville. Interment will be at Fort Snelling National Cemetery at a later date. Friends may greet the family one hour prior to the service at the church. Bayview/Freeborn Funeral Home is assisting the family. Online condolences are welcome at www.bayviewfuneral.com. 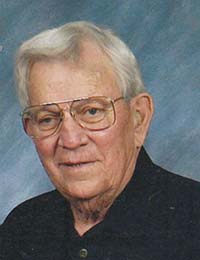 Claude (Sparky) Emerson Gore was born Oct. 8, 1925, near Roland, Iowa, to James and Theresa Gore. He graduated from Northwood High School in 1944. He served with the United States Army from 1944 to 1946 as Army personnel on board the USS Brazil. Sparky married Evelyn Mellum on Jan. 25, 1948, at First Lutheran Church of Glenville. He managed Princess Theater in St. James from 1951 to 1956. They then moved to Glenville and owned Sparky’s Standard Station until 1972. Sparky then took courses to enable him to teach small engine repair classes. He taught classes in Albert Lea, Emmons and Owatonna for a number of years.

Sparky and his wife, Evelyn, enjoyed snowbirding in Mesa, Arizona, for a number of years with many friends from around the Glenville/Albert Lea area. In 2010, he and his wife moved to Mason City to live at The Manor. Sparky continued his carving hobby in the upstairs workshop. He traveled to Albert Lea every Thursday to visit with a group of buddies from the Albert Lea Family Y. Sparky had many interests including hunting, fishing, collecting guns, wood carving, birds, trap shooting, various collections and gardening. Special enjoyment came from being with his grandchildren.