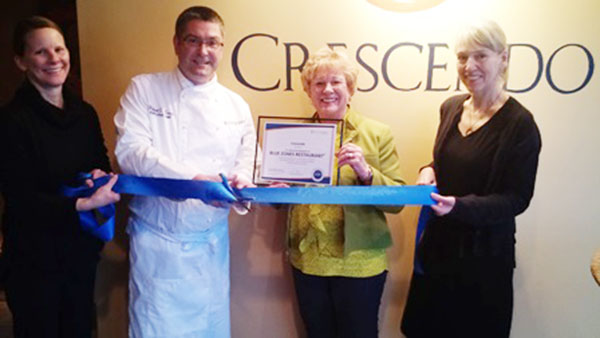 The Blue Zones Restaurant pledge contains evidence and theory-based practices to make healthy choices easier while offering tools and tips to improve customers’ health. Many of the simple changes suggested are based on research from Cornell University’s Dr. Brian Wansink, author of Mindless Eating: Why We Eat More Than We Think.

Crescendo has been a long-time supporter of Blue Zones Project and is in the original group of organizations that helped Albert Lea get to where they are today in well-being improvement,” said Blue Zones Project Organization Lead, Ellen Kehr. “They see the importance of preparing entrees with fresh ingredients, adding choices to their menu for all customers and in doing so continue to deliver on their mission and be a leader in their industry of fine dining.”

For more information contact the Blue Zones Project staff at 507-402-5144 or visit www.bluezonesproject.com.

Albert Lea, a Blue Zones Project demonstration site, is receiving assistance from experts to develop and implement a blueprint for making permanent environmental, social and policy changes that transition people into healthier behaviors that can lead to longer, happier lives.

The Blue Zones Project is a community well-being improvement initiative designed to make healthy choices easier through permanent changes to environment, policy, and social networks. Its mission is to lead and ignite community-by-community well-being transformation, where people live and work together in Blue Zones Communities for a better life.