Memorial services for Donald L. Lunn of Albert Lea will be at 2 p.m. Saturday at Trinity Lutheran Church in Albert Lea. The Rev. Donald Malinsky will officiate. Friends may greet the family one hour prior to the service at the church. Interment will be in Hillcrest Cemetery. Military honors will be accorded by the Albert Lea area veterans groups. 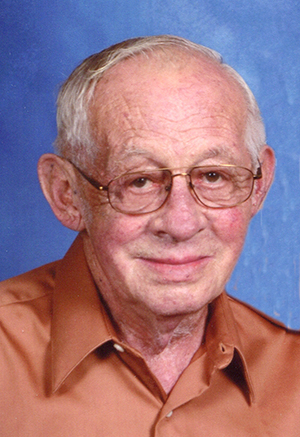 Don was born Feb. 12, 1934, in Ledyard, Iowa, the son of Edward and Hazel (Rowell) Lunn. He graduated from public school in Ledyard. Don served his country as an Army paratrooper stationed out of Fort Bragg, North Carolina. On April 25, 1964, he was united in marriage to Lois Erdahl in Rake, Iowa.

Donald was a member of Trinity Lutheran Church and retired from Northwest Rubber in Albert Lea. He then was employed by Tandem Co. in Blooming Prairie. He was also a custodian at Peoples Savings and Loan for many years. Don had been a Cub and Boy Scout leader, enjoyed camping, sports — especially college basketball — visiting with friends and neighbors, and was great with the neighborhood kids. He was called “the big neighborhood kid.” He also loved the time he spent with his grandchildren. Don loved to tinker with things and tried to fix just about everything.

Donald is survived by his wife, Lois, of Albert Lea; children Kevin (Kate) Lunn and their daughters Olivia, Isabella and Elizabeth, all of Prior Lake, and Debbie (Tom) Lawrence and their son, Gavin, of Albert Lea. Also surviving are special nieces, nephews and cousins; sisters-in-law Mona (Harlan) Levorson of Lake Mills, Nadine (Joe) Jones of Arlington, Virginia, and Janice (Darl) Amberger of Albert Lea; and one brother-in-law, Chuck (Rita) Erdahl, of Cannon Falls.

He was preceded in death by his parents Edward and Hazel Lunn; in-laws Alvin and Muriel Erdahl; and brothers-in-law Red Neumann and Dick Erdahl.

Donald’s family extends a special thank you to the St John’s Lutheran Community staff for their exceptional care and also the dialysis unit at Mayo Clinic Health System in Albert Lea.