Funeral services for Eunice R. Anderson, 88, of Albert Lea will be at 11 a.m. Saturday at Central Freeborn Lutheran Church. The Rev. Matt Griggs will officiate. Interment will be in Central Freeborn Cemetery. Visitation will be from 5 to 7 p.m. Friday at Bayview/Freeborn Funeral Home and one hour prior to the service at the church. Online condolences are welcome at www.bayviewfuneral.com. 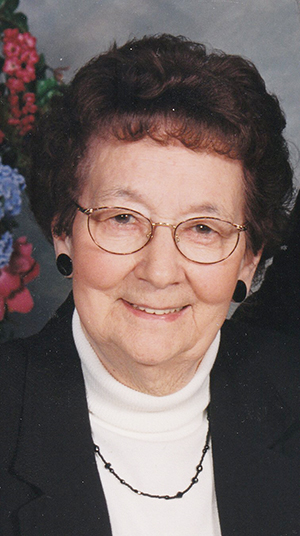 Eunice Ruth Anderson was born March 26, 1927, in Albert Lea, the daughter of Herman and Grace (Schoenrock) Heideman. Eunice was baptized and confirmed at Pickerel Lake Lutheran Church. She graduated from Albert Lea High School in 1945. On Sept. 21, 1947, Eunice was married to Clair B. Anderson at Bethlehem Lutheran Church in Myrtle. In 1958 Eunice and Clair moved north of Albert Lea and joined Central Freeborn Lutheran Church. She was active in the Women of the Evangelical Lutheran Church Association there. Eunice was a dairy farmer along with her husband, and worked in the metal shop at Streater for 23 years. Eunice’s family was very important to her and she loved spending time with her children, grandchildren and great-grandchildren. She very much enjoyed going out for lunch at the Trumbles. Blessed be her memory.

Eunice was preceded in death by her parents; her husband, Clair; sisters Helen Amundson and Lois Wolff; and brother, Harlan Heideman.