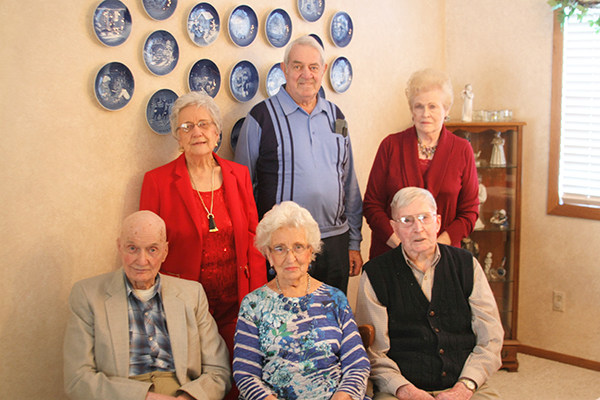 In 1934 Peter and Catherine Petersen moved from White River, South Dakota, and settled on a farm just northwest of Albert Lea. As the family grew and the nine children started their own families, Christmas would bring everyone together at grandma and grandpa Petersen’s home to celebrate and enjoy traditional Danish foods.

As the grandchildren started their own families, the tradition of gathering together dwindled as only the original brothers and sisters gathered to celebrate Christmas.

Twelve years ago, a few of the cousins began a new tradition. In honor of their parents, they started gathering on the first weekend after New Year’s and prepared and served them the traditional foods they previously enjoyed. This year was special as it may be the last time this event will take place.

Several brothers and sisters have enjoyed these gatherings and include Edwin Petersen, husband of the late Vera (Barnes) Petersen of Oakland, who will be 100 years old in May. Edwin Petersen farmed in Moscow Township and wrote the column “One Farmer’s View” for the Albert Lea Tribune for over 20 years. Lettie Petersen Anderson of Clarks Grove is 93. Her husband, the late Lyle Andersen, worked as a butter maker in Lerdal, Glenville and Clarks Grove. Bernard Folksen, 96, husband of the late Ruth (Petersen) Folksen, farmed and worked as a carpenter in Freeborn County. Erna (Petersen) Berthelsen, 88, is the wife of the late Bob Berthelsen. Bob Berthelsen worked as a principal in the Albert Lea Schools for 16 plus years and Kenneth Petersen, 74, and his wife, Elizabeth, also attended the dinner. Danish dishes prepared and served by the grandchildren of Peter and Catherine Petersen for their parents included medisterpolse, a Danish sausage; brunede kartofler, brown potatoes; frikkadeller, meat balls; rodkal, cooked red cabbage; aebleskiver, a pancake ball; citronfromage, lemon mousse; and Aeblekage, apple cake.