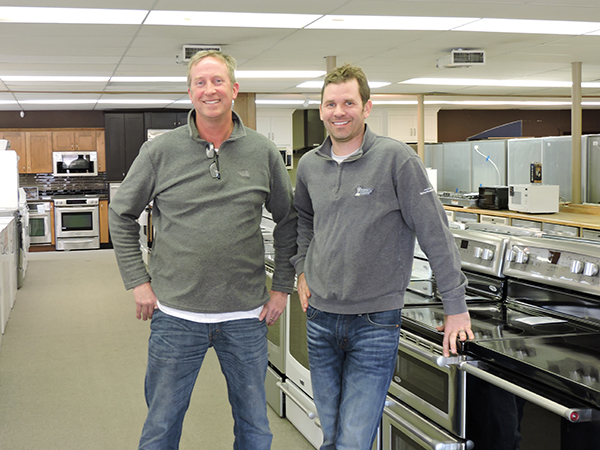 GENEVA — Many businesses have humble beginnings, and the same is true for Sorenson’s Appliance and TV in Geneva.

According to Dak Sorenson, it all started when family patriarch, Warren Sorenson, sold a washer and dryer out of the back of the shop he would service cars and lawnmowers in.

“And so they say, the rest is history,” Sorenson said.

He grew up listening to stories of his grandfather unloading hundreds of appliances per week from railroad cars. 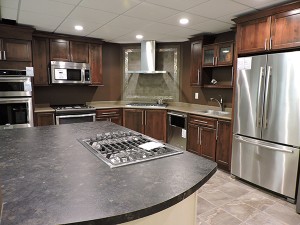 Sorenson Appliance and TV has display areas which showcase what a kitchen could look like with the appliances they sell. – Kelly Wassenberg/Albert Lea Tribune

Years later, Sorenson’s father and two of his uncles would take over.

Scott was the first one of the brothers to retire, and then Sorenson’s father, Mark, who sold his half of the company to him about 10 years ago.

Sorenson is now co-owner of the store with his uncle, Tim Sorenson, who is still in the business.

In the beginning, the business sold everything from water heaters to LP tanks. Today it specializes in major kitchen appliances, including refrigerators, stoves, dishwashers, washers and dryers. It also carries other merchandise including televisions, microwave ovens and vacuum cleaners.

The company utilizes three trucks and six employees to deliver about 30 appliances per day within a 40- to 50-mile radius extending to Kiester, Mason City, Rochester and Faribault. And in all its years, Sorenson’s has never charged a delivery fee.

“If you treat a customer right, they may be a customer for life,” Sorenson said.

Customer service is important to the business as it couldn’t have survived this long without the support of Geneva residents and the communities that surround it.

He believes in giving the customer the deal and said he’s never been beat on a price, but the customer service doesn’t stop after their purchase is made.

“When it’s all said and done, we’re going to take care of them after the sale,” Sorenson said, referring to the one-year warranty customers automatically receive on major appliances bought from their store.

“They don’t have to call the 1-800 number; they can just call us directly, and we’ll take care of them.”

The company can order any appliance a customer might like, but Sorenson’s is primarily a Whirlpool-exclusive store, selling Whirlpool products and the labels the company owns, such as Maytag, Amana, KitchenAid and Jenn-Air.

Sorenson explained there are two reasons for this. First of all, Whirlpool makes great products. Secondly, Sorenson supports products made by American workers with American parts.