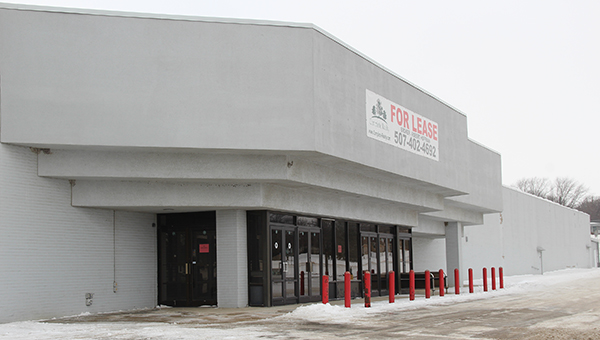 Walmart vacated this building in October 2003 to move across town to its present location on Blake Avenue. — Sarah Stultz/Albert Lea Tribune

After about 12 1/2 years of sitting vacant, the former Walmart building in western Albert Lea will finally have a new occupant.

Farm and ranch supply company Bomgaars, headquartered in Sioux City, Iowa, announced on Wednesday it signed a lease Jan. 22 for the building at 1721 W. Main St.

Meyer said the Albert Lea location is one of three the company will open over the next three or four months. Other new locations are in Grimes, Iowa, and Burlington, Colorado.

“We feel it is a good opportunity,” Meyer said. “It’s the type of towns we’re in.” 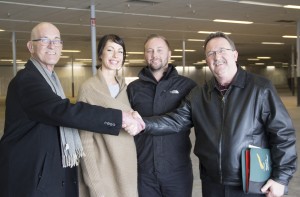 The lease will run for 12 years, after which the company will have the chance to extend the lease. Meyer said the eventual goal is to purchase the building.

When it opens, there will be 35 to 45 employees, most of whom will be hired locally. Meyer, who has family ties to Albert Lea, said a manager and assistant manager have already been hired from within the company from other places in the country.

“I think it will be a good addition to Albert Lea,” he said.

The store was originally built in 1985, when Arkansas-based discount retailer Walmart grew its chain by going into regional centers in the Midwest like Albert Lea. The retail space was abandoned in October 2003, when a Walmart Supercenter opened on Blake Avenue.

Robert and Angie Hoffman, owners of Complete Realty, have managed the property since Feb. 1, 2013, after Walmart’s lease on the building ended. The owner of the building is WLM Retail Partnership, according to online Freeborn County property records.

Robert Hoffman said former Albert Lea Economic Development Agency Executive Director Dan Dorman and Ryan Nolander referred their property management company to the owners of the building. The owners were looking for both a licensed real estate broker and property manager, of which Complete Realty has both. While Complete Realty was hired initially to manage the property, eventually it was asked to start advertising the building and trying to find someone for the space.

The couple looked up about 50 or 60 potential businesses and made dozens of calls to people to see if there was any interest and advertised nationally online on a commercial real estate listing service.

Over the years, he and his wife have been approached by groups such as the Salvation Army, car dealerships and even someone who wanted to showcase the world’s largest baseball hat collection.

“There’s been a buzz about what’s going to go in there next,” he said, noting he is pleased with the outcome.

“Being in real estate in Albert Lea as long as I have — to be a part of easily one of the biggest transactions that professionally is as exciting as it can be — it’s something I’m very proud to be a part of,” he said.

Complete Realty will continue forward as property manager of the building.

“It’s been very exciting for us to be a part of the whole process all the way through,” Angie Hoffman said.

Randy Kehr, executive director of the Albert Lea-Freeborn County Chamber of Commerce, said he looks forward to seeing Bomgaars become an active part of the community.

“It’s been a long time in the process, and it’s exciting to see the conclusion,” Kehr said.