Funeral services for Herbert S. Neale of Albert Lea will be at 11 a.m. Friday at Salem Lutheran Church in Albert Lea. The Rev. Mark Niethammer will officiate. Interment will be in Hillcrest Cemetery. Military honors will be accorded by Freeborn County veteran’s organizations. Friends may visit with family one hour before the service at the church.

Bonnerup Funeral Service is assisting the family with arrangements. 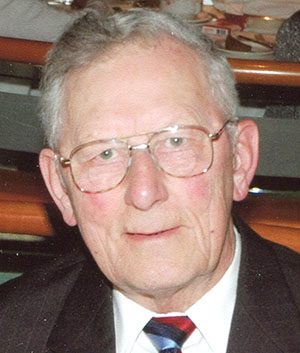 Herbert Shelton Neale was born Jan. 1, 1927, in Worth County, Iowa. He was the second child of Herbert Samuel and Cecil Leota (Elliott) Neale. He married Caroline Margareta Lorenzen May 12, 1962. They were the proud parents of Shannon, Peggy and David.

Herb attended Northwood elementary and high school. In 1945, his junior year of high school, Herb was drafted into World War II with the United States Marine Corps. He served in China with the 6th Marine Division to assist with the repatriation of the Japanese army. He returned to Northwood High School and graduated in 1947. He received an accounting degree from Chillicothe, Missouri, business college where he participated in track and football.

Herb was recalled to the Marine Corps in 1950 at the beginning of the Korean War. During the Korean War he served in the 1st Marine Division artillery unit. He participated in four major engagements and served 271 consecutive days on the frontline. After the Korean War Herb returned to his position at Interstate Power Co. and retired in 1990 after 40 years of service.

Herb was an incredible father and husband and loved his family very much. He passed his love of adventure and sense of humor onto to his children. Those that knew Herb knew of his additional love of flying. Herb enjoyed retirement by traveling throughout the United States, installing weather systems at airports and spent years working as a contractor for the State of Minnesota Department of Aeronautics working at airports throughout the state. He was an amateur operator with the call letters K0HN.

Serving his country gave him a deep sense of patriotism and commitment to his community. He showed this passion through his involvement with a large number of organizations. He was the chairman of the American Cancer Society 100 Mile Bike-A-Thon for many years, president of the Albert Lea Management Club, executive director of Junior Achievement, a member of the Albert Lea Airport Advisory Commission, past member of Noon Kiwanis Club, current member and past president of Golden K1 Kiwanis, Albert Lea Amateur Radio Club and SkyWarn spotter — with some interesting tornado stories. Herb proudly received the District 241 Citizen of the Year Award in 2008. He remained a member of the American Legion and a life member of the Disabled American Veterans.

Herb and Caroline were married at Salem Lutheran Church and remained active members throughout Herb’s lifetime.

He is preceded in death by his brother, Eliot Neale; sisters Ardis Lebrecht and Bonnie Fields; and son-in-law, William Richards.

Memorials may are preferrred to the Albert Lea American Legion or Youth for Christ.