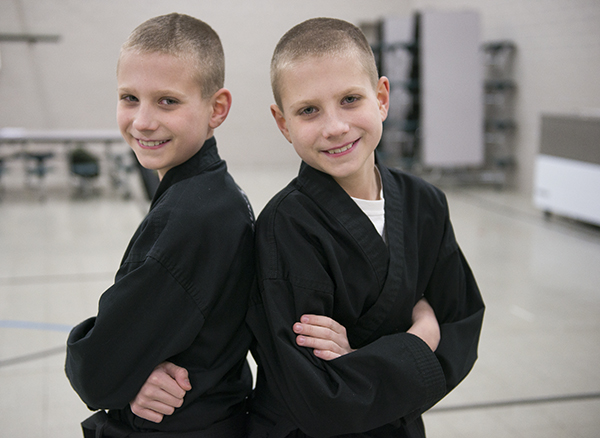 At the age of 11, Charley and Pacey Brekke have tackled a feat of passing the test for their black belts in their first attempt.

According to their instructor, karate master Jeff Wood, that’s better than Chuck Norris can say. The martial arts legend failed his first time.

It’s nothing to be ashamed of, though, as Wood said testing for the black belt requires rigorous training and passing the test on the first try is actually more of an exception than the rule.

Wood has been teaching the identical twins since they were 6 years old through the Young American Schools of Self-Defense class. 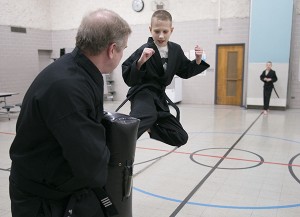 The program has a state administrative office in Lakeville, but offers the program in many different communities. Wood has been with the program for the last 23 years driving down from the metro area to teach classes on Wednesday nights in both Albert Lea and Austin.

“Not all the students that come in here are focused on the techniques, but I could tell from the get-go, they were,” Wood said. “They were coming in every week. They were focused on the material, and they were working very diligently in the class.”

The boys’ perseverance paid off. They started the program when they were 6, and with the exception of one trimester, have been attending classes year-round. During that time, the boys tested 13 times, advancing to a higher rank at the conclusion of each session.

Wood has actually taught children even younger than the boys were when they began. He said children as young as 4 have participated in the program.

“The most vulnerable people in society are the really, really young and the elderly,” Wood said.

His class offers more than self-defense training, though.

“They are learning self-defense maneuvers, they’re learning karate techniques, but it’s even much more than that,” Wood said. “It will help to elevate a person’s sense of self-confidence and esteem. It will teach them how to become more respectful of people in authority. It will improve their physical fitness, and I think it teaches people how to become a better, more responsible citizen.”

The boys’ parents Travis and Norena Brekke agree and believe that the boys have benefited by learning how to focus and concentrate more while partaking in the program.

Travis Brekke said he’s encouraged by how well his sons have demonstrated the ability to achieve a long-term goal.

“It’s something they will benefit from for the rest of their lives,” he said.

“What really made me look forward to coming was getting a new belt each year,” Charley Brekke said. “It was fun going to it with my brother.”

Pacey Brekke said he looked forward to going to karate because it helped him learn to defend himself in the case that something bad happened.

“It was fun because my brother was with me and we do a lot of stuff together,” he said.

It wasn’t all fun and games though. The boys admitted there were times that they just didn’t feel like practicing at home even though it’s important to do.

Pacey Brekke said a student needs to keep practicing the techniques and work hard to keep their techniques, “straight and not sloppy.”

There were moves that were harder than others. Both of them noted the most difficult was the double-jumping front kick.

“We still aren’t very good at it,” Charley Brekke said.

Katas are also challenging to learn as they are routines students are required to learn that include 60 different karate moves.

Currently, the boys are taking the trimester off before they plan on going back. Now that they’ve earned their black belts they are eligible to come back to the classroom and help as senseis. They will then be eligible for their second-degree black belt, which both boys plan on earning.

The boys are fifth-graders at Lakeview Elementary School. They also participate in the Tiger Sharks Swim Team at the Albert Lea Family Y and will be graduating from Cub Scouts to Boy Scouts later this month.