A Lake Mills man was charged in Olmsted County District Court on Tuesday with promoting prostitution at a Rochester hotel. 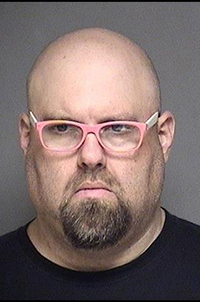 Michael Alan Gardner, 40, was arrested after an undercover officer with the Rochester Police Department responded to an online advertisement for a 22-year-old woman.

Gardner was reportedly found responding by phone to the men who wanted to set up appointments from the ad.

The woman reportedly told police she had been dropped off at the hotel by Gardner, who controlled the phone attached to her ad.

Gardner reportedly told police the woman was using his phone to answer the “johns” who responded to her ad. After the woman went into the hotel, she had reportedly asked him to respond to any other people who might contact the number about the ad.

He said the woman gives him money for driving her to her dates, according to the court file.

In addition to one count of promoting prostitution of an individual, a felony, Gardner faces one felony count of fifth-degree drug possession after authorities found he had a container with methamphetamine in his pocket.

He is next slated to appear in court March 8.

Promoting prostitution carries a maximum penalty of 15 years in prison and a $40,000 fine.