A Clarks Grove man pleaded not guilty Thursday afternoon in Freeborn County District Court to breaking into a residence last month while armed with a baseball bat.

Dufrene was charged after a deputy with the Freeborn County Sheriff’s Office was dispatched to a reported residential break-in at 10:45 p.m. Jan. 30 in Clarks Grove. 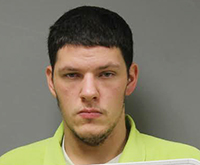 According to court documents, upon arrival, a deputy reportedly spoke with the alleged victim who reported that he had been upstairs in the home when he heard a loud crash downstairs.

The alleged victim reportedly turned on a light in the entryway, and at the entry door he reportedly saw Dufrene, who was reportedly holding a baseball bat and wearing a black, hooded top and blue jeans.

According to court documents, Dufrene had his hand inside the residence and was attempting to unlock the door.

A deputy reportedly observed glass that was broken out of the entry door of the residence, and noted broken glass on the ground and stairs at the entry.

The alleged victim also showed the deputy a broken window on the back of the house, and footprints were found from the broken back window toward the alley.

The deputy reportedly found the wooden baseball bat approximately 10 feet from the residence.

Both reportedly claimed they had been home all night and didn’t know anything about the burglary.

In a statement at the Freeborn County jail, Dufrene again claimed he had been at his grandparents’ home all night.

Dufrene is next slated to appear in a settlement conference April 13. A jury trial is scheduled for July 12.