Man pleads not guilty to striking woman with knife

An Albert Lea man pleaded not guilty Thursday afternoon in Freeborn County District Court to striking his girlfriend with a knife in January. 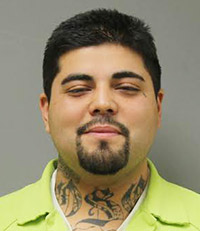 According to court documents, an officer was dispatched to a residence in Albert Lea on Jan. 11 on a report of a domestic assault. Upon arriving, the officer spoke to the alleged victim who claimed Rodriguez had assaulted her two days prior.

She reportedly had bruising on both of her eyes and an abrasion near her left eye and claimed the abrasion was caused when Rodriguez hit her in the face with a kitchen knife.

According to court documents, she claimed the injuries were a result of being beaten, head-butted and slashed in the face with a kitchen knife.

Freeborn County District Court Judge SteveSchwab had reportedly signed an amended order for protection against Rodriguez in December that prohibited him from committing acts of domestic assault against her and from being within two city blocks of her residence.

A settlement conference is scheduled for May 5, with a jury trial July 26, if the case hasn’t been settled by then.

If convicted of second-degree assault, Rodriguez faces a maximum sentence of seven years in prison and a $14,000 fine.