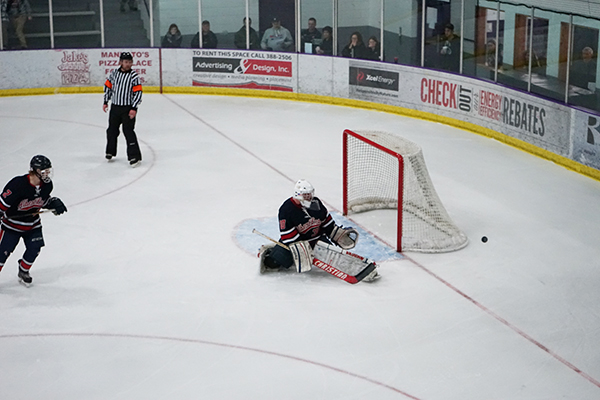 Albert Lea goalie Ben Witham deflects a shot into the corner during Thursday’s Section 1A semifinal game against Mankato West. Witham made 37 saves in the Tigers’ 2-1 double-overtime loss to the Scarlets. – James Eaton/For the Albert Lea Tribune

MANKATO — The Tigers season may have come to an end, but it was not given up without a fight.

Mankato West’s Ben Heichel ripped a slapshot into the net in the second overtime Thursday to defeat the Albert Lea boys’ hockey team 2-1 in a gut-wrenching Section 1A semifinal high school hockey match.

“In 50 years I’ve been through a few of these,” Albert Lea coach Roy Nystrom said outside a downtrodden locker room. “If you’re gonna lose I guess this is the best way to lose, in double overtime.”

The two teams punched and counterpunched each other through three scoreless periods, trading shots and scoring chances before Heichel’s goal ended the Tiger’s season at 11:53 of the second overtime.

“It was one of those games where anybody could have won it,” Nystrom said. “All it takes is one shot and the game is over, and they got the shot.”

The frenzied game was filled with hard checking and superb goaltending from Albert Lea’s Ben Witham, who ended with 37 saves. Witham was a force at times throughout the game, including the first overtime when he made three key saves.

“I expect them to play well every game — to tell you the truth — and they did,” he said. “They played hard. They did. It was an exciting game.”

The Tigers entered the game decided underdogs, but fought the second-seeded Scarlets to a standstill. Mankato West almost ended the game at 9:31 of the second overtime when a shot trickled through Withan and nearly crossed the goal line. The apparent goal had Mankato West and its fans celebrating wildly, but the goal was disallowed after the referees consulted.

Nystrom said he didn’t do anything special to prepare his team for Mankato West.

“We just worked on what we do well and we did that,” he said. “We played a good defensive game. We gave up shots but they were from the outside. Our defensemen played well and the forwards came back deep.”

The Tigers opened the scoring at 5:13 of the first period while killing a penalty. Defenseman Lucas Hacker gambled and carried the puck deep into Mankato West’s zone. The gamble paid off when Hacker’s backhand shot was stopped by Mankato West goalie Jackson Peterson. However, Mitchell Evans had followed Hacker into the zone and put the rebound past Peterson for the short-handed goal.

Mankato West battled back to tie the score with one minute left in the first period. The Tigers had just killed off a minor penalty to Hacker with the help of several spectacular saves by Witham. But Heichel stole the puck deep in the Albert Lea zone and fired a wrist shot into the far side of the net to tie the score at one.

That’s where it stayed, until Heichel’s slapshot ripped through Withan and ended the game.