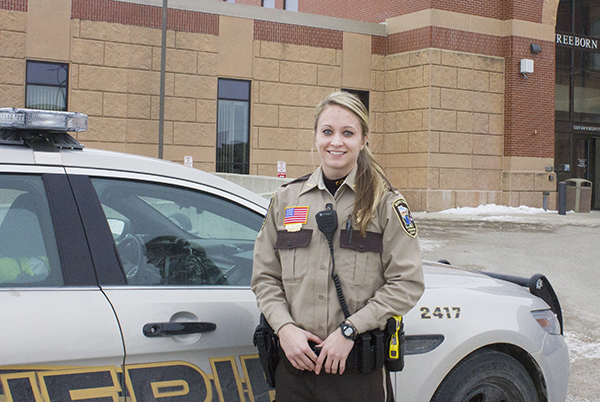 A new patrol deputy with the Freeborn County Sheriff’s Office is looking to incorporate her outgoing personality and friendly nature into her new position.

Paulson, who began training Feb. 2, is learning the geography of the county, including its roads and interstates.

She plans on being in training for 14 to 16 weeks.

Paulson said her job fits her because she doesn’t like to sit behind a desk all day, and is looking forward to upholding the laws and communicating with citizens in rural county communities for their betterment.

Paulson plans on being a solid communicator and treating each person she meets on the job with respect.

“Respect is huge to me,” Paulson said. “I will always give a person respect right away.”

Paulson, a Becker native, graduated from Becker High School in 2011 and St. Cloud State University in December 2014 with a Bachelor of Science degree in criminal justice.

Paulson said working in law enforcement in southern Minnesota, close to her extended family in Winnebago and New Ulm, has been a dream of hers since high school.

She said she enjoys small-town and country life, and she would like to start a hobby farm in five to 10 years that includes sheep.

Paulson, who lives in Albert Lea, said she enjoys the community’s lakes, but said she hasn’t had the chance to enjoy them yet with winter’s cold temperatures.

“It seems like a really nice community,” she said.

Paulson said she wants to build relationships with residents in the smaller communities in Freeborn County and communicate with them to carry out her duties to uphold the laws of the state of Minnesota.

Paulson said she misses home sometimes, but is excited to start a new chapter in her life.

Paulson is the second female deputy in the Sheriff’s Office.