Mpls. moves ahead with body cameras 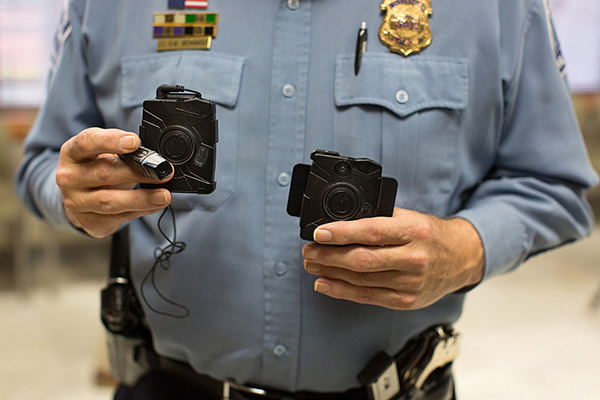 Minneapolis Police Lt. Greg Reinhardt holds up two body cameras at Minneapolis City Hall. The one on the left attaches to the lapel or glasses while the one on the right mounts on an officer’s chest. – Jennifer Simonson/MPR News

A Minneapolis City Council committee has unanimously approved a five-year, $4 million contract with Taser International for police body cameras and other equipment.

However, police officials said delivery of the gear will be delayed by about two months. Deputy Chief Travis Glampe said the delay was caused by a bottleneck of orders from other departments that, along with Minneapolis, received federal grants to buy the cameras.

“We’re getting in line with places like Los Angeles, New York, Chicago,” Glampe said. “We understand the 60-day delay is going to be an industry standard right now. And we kind of knew that going into it.”

Glampe said the gradual roll-out should start in May, and all patrol officers should be wearing body cameras by this fall. The contract must still go through another committee and then the full council.

He said the department will equip officers with cameras one precinct at a time, starting with officers working downtown in the 1st Precinct. The next area to get cameras will be the 4th Precinct in north Minneapolis, where officers make more arrests than in any other part of the city.

The contract includes not only 587 cameras, but also the accessories for the cameras, including docking stations, clips to attach them and storage for the video. Minneapolis will also get 300 Tasers, also known as “conducted electrical weapons,” to replace the old ones.

Deputy Chief Glampe told council members that after the six-month pilot project last year, most of the three dozen officers who wore the cameras didn’t want to give them up when the pilot was over because they liked wearing them.

He said a draft policy on the cameras, including when the cameras will be turned on and off, is still being reviewed, and should be made public in the next few weeks. Committee members approved a directive that requires the police department to come back to the committee in a few weeks with an update on how the department will get public input on the policy.