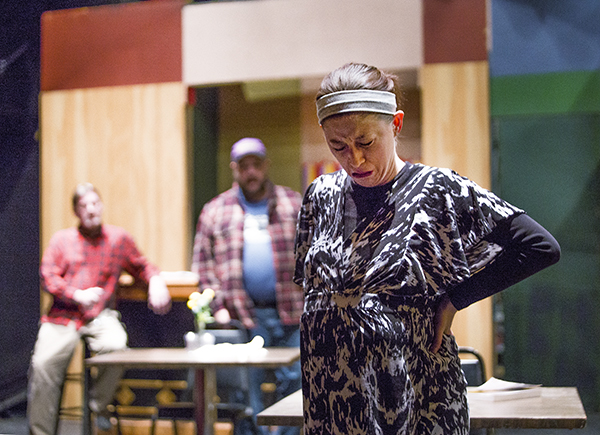 An fun, humorous musical for both young and old is coming to the Marion Ross Performing Arts Center later this week.

Written by Minnesota brothers Phil and Paul Olson, the musical is part of the smash hit musical comedy series “Don’t Hug Me” that takes place in Bunyan Bay, in a little bar called The Bunyan, owned by Clara and Gunner Johnson.

Clara is nearly nine months pregnant with their first child when a freak snowstorm occurs as she goes into labor, and Gunner realizes he’s going to have to deliver the baby in the bar.

Sue Jorgensen is directing the musical, with music direction by Barb Lang. Cast members are Rebecca Griffin as Clara, Jason Howland as Gunner, Gordy Handeland as Kanute, Lauren Severson as Bernice and Luke Zacharias as Aarvid.

“They are really good actors, really good singers and they are all comedians,” Jorgensen said of the cast. 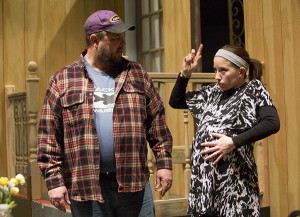 She said there are 18 songs presented in the show, and most are humorous. Two of her favorites were titled “Babies and Beer” and “If Men Had Babies, We’d All Be Extinct.”

“It’s all very funny — entertaining to all,” she said.

Steve Kinney is building the set.

Jorgensen said she is enjoying rehearsals and looks forward to presenting the musical.

Tickets are $18 for adults and $10 for students. Tickets may be purchased over the phone by calling 1-877-730-3144, online at actonbroadway.com or at the box office, which opens Monday the week of the show’s opening. It is also open every Thursday from 4 to 6 p.m. Tickets are also available at the Albert Lea Convention & Visitors Bureau.

Jorgensen said the musical would make a great date on Valentine’s Day as the play contains several love stories.

“The humor is very Minnesotan, and it’s a fun evening,” she said. “People will enjoy it.”

Information: Tickets can be purchased over the phone at 1-877-730-3144, online at actonbroadway.com, at the Albert Lea Convention & Visitors Bureau and at the box office, which opens Monday the week of the show’s opening