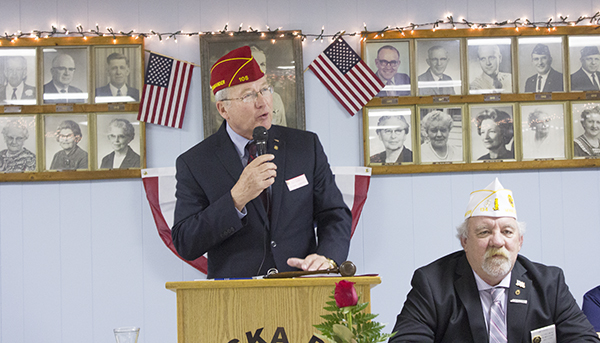 WELLS — More accountability is needed at the U.S. Department of Veterans Affairs, according to the national commander of the American Legion.

“We owe that to our veterans,” Dale Barnett told approximately three dozen veterans Wednesday afternoon in a brief speech at the Wells American Legion.

Barnett said the VA is worth saving but needs work to make it possible for more veterans to be served. 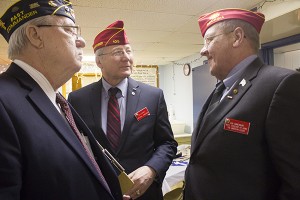 Barnett said other efforts the American Legion is making to improve the lives of veterans include its effort to make electronic medical records flow smoother from the Department of Defense to the VA.

He said despite partisanship and tough times, the United States is still the greatest country in the world, and the American Legion can bring people together like no other organization.

An empty chair sat in front of local, state and national American Legion leaders to signify those who have been missing in action or prisoners of war.

A Georgia resident, Barnett referenced his pride in being involved with the American Legion and of the sacrifices made by fellow members.

Barnett’s visit is part of a four-day swing through the state. He concluded Wednesday with a dinner in Adams. Today he is stopping in Stewartville, Preston and Winona. 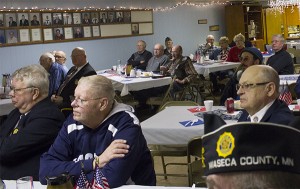 The Minnesota American Legion has 80,000 members in nearly 550 posts throughout the state. The organization serves as a watchdog for veterans rights and is heavily involved in Minnesota communities through programs like baseball, Boys State and Girls State, Legionville School Safety Patrol School, Scouting and other projects.

District 27A Rep. Peggy Bennett, R-Albert Lea, said she was proud to have attended the event.

“I think it’s an honor to be amongst these people, because in my mind they’re heroes,” Bennett said. “They’re our heroes.”