Memorial services for Richard Dean Langerud of Albert Lea will be at 11 a.m. Tuesday, at Grace Lutheran Church in Albert Lea. The Rev. Janet White will officiate.

Interment will be in Graceland Cemetery. Military honors will be accorded by Freeborn County veterans organizations. Friends may visit with family from 5 to 7 p.m. Monday at Bonnerup Funeral Service in Albert Lea and one hour before the service at the church. 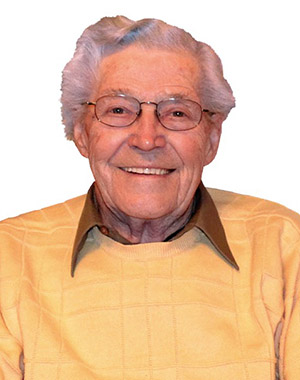 Richard proudly served his country in the United States Army from April 1945 until his honorable discharge in December 1946.

Richard was united in marriage to Mavis E. Erickson June 24,1950, at Bethany Lutheran Church in Thompson, Iowa. To this union four children were born, Cindy, Douglas, Michael and Patty.

Richard and Mavis had made their home in Albert Lea, where Richard worked for Streater for several years. In 1972, they moved to Stewartville and Richard served as retail manager for St. Paul Clothiers in Rochester for more than 29 years before retiring. Following his retirement, Dick and Mavis fulfilled a lifetime dream of traveling across the United States.

Mavis died in 1995, shortly after their 45th wedding anniversary.

Richard was a member of Grace Lutheran Church, Zion Lutheran Church, the Elks Club, Eagles Club, American Legion and Singles and Solos of Mower County. Throughout his life he had enjoyed traveling, playing cards, dancing, woodworking, gardening and sports. He was a devoted husband, father, grandfather and friend and always enjoyed being surrounded by family.

Richard will be remembered for his outgoing personality, warm smile and gentle spirit.