Funeral services for Rose M. Gold, 83, of Albert Lea will be at 11 a.m. Thursday at First Lutheran Church. The Rev. John Holt will officiate. Interment will be at Hillcrest Cemetery.  Visitation will be from 5 to 7 p.m. Wednesday at Bayview/Freeborn Funeral Home and one hour prior to the service at the church. Online condolences are welcome at www.bayviewfuneral.com. 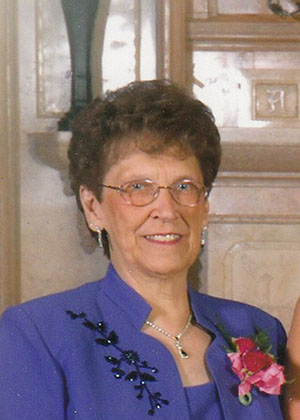 Rose M. Gold was born April 1, 1932, in Kensington, the daughter of Carl and Henricka (Hatleli) Stolaas. She grew up in Albert Lea and St. Paul, graduating from Albert Lea High School in 1950. Rose was united in marriage to Paul Gold on June 11, 1950, in Albert Lea. She enjoyed many activities including quilting, embroidering, cooking, sewing, baking, canning and playing cards and games. Rose also enjoyed traveling, camping and spending time with family and friends. She was a member of DOES, the Eagles Club and First Lutheran Church, where she participated in altar guild.

Rose was preceded in death by her husband, Paul; parents Carl and Henricka; sisters Clara and Olga; brothers Ray and Charles; her mother-in-law and father-in-law; and many sisters-in-law and brothers-in-law.