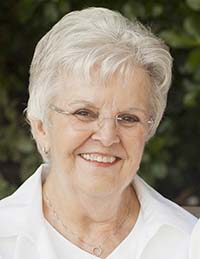 Shirley was born Aug. 13, 1940, in Thompson, Iowa, to Palmer and Vera Hove. She was a beloved sister to four brothers: Merrill and wife, Geraldine, of Clear Lake; Glen of Sun Lakes, Arizona; Harlan of Alexandria, Virginia; and Roger and wife, Helen, of Tucson, Arizona.

After graduating high school and completing business school, Shirley went to work for IBM. It is there that she met the love of her life and future husband, Lee Henning, originally from Zumbrota. This would be the beginning of an incredible adventure she could have never imagined. It began by raising their two cherished children, Lori and Terry, beginning in Rochester, Minnesota, followed by Warwick, New York; back to Rochester, Minnesota; then onto Ridgefield, Connecticut; Framingham, Massachusetts; and finally to the shores of Lake Ossipee in Center Ossipee, New Hampshire.

Somewhere in between Framingham Center Ossipee, Shirley and Lee found themselves in Manila, Philippines, for six years, followed by Hong Kong for another eight years. It was there, in the Far East, that she flourished and found much happiness with her close expatriate friends, traveling, playing mahjong and shopping along the crowded sidewalks and at Stanley Market — always looking for a bargain. One of her favorite memories of time spent in Manila was her volunteer work at the local orphanage. She was blessed to have had the opportunity to travel all around the world, experiencing so many different traditions and cultures.

Shirley was a loving wife, mother, sister, aunt, grandmother, friend, New England Patriots and Boston Red Sox fan and a devout Lutheran. She loved to care for her family and considered that her favorite pastime. She enjoyed reading, sewing, shopping, traveling, giving gifts and keeping Lee organized. Most of all, she loved to spend time with her beloved grandchildren Dylan and Tyler, listening to them laugh and play. She often looked forward to the nights they would connect from afar by means of video chats.

Shirley is preceded in death by her parents Palmer and Vera Hove, and an infant sister, Vivian.

She is survived by her husband of 54 years, Lee; her daughter, Lori, and husband, Jim Kuhn, of Spencerport, New York; her son, Terry, and grandchildren Dylan and Tyler Henning of Manchester, New Hampshire.

A service will be at noon Saturday at Trinity Lutheran Church, followed by a burial ceremony and celebration of life luncheon. The address is 10681 500th St. in Thompson. All are welcomed to attend.

In lieu of flowers, a donation may be made in Shirley’s name to the Alzheimer’s Association.