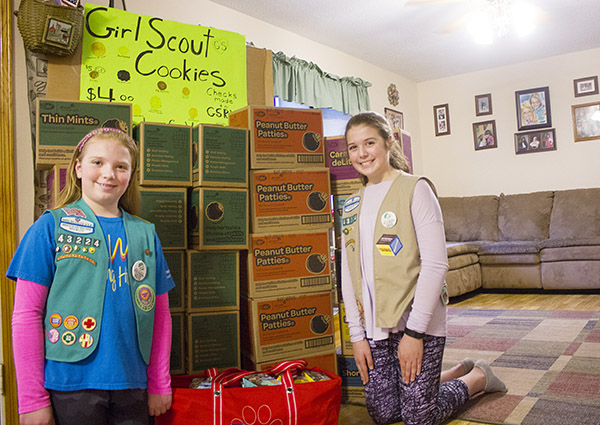 The girls, thinking that a more localized need existed, started delivering cookies to veterans throughout Freeborn County two years ago. More than 1,000 boxes were delivered in the first year.

The girls delivered the cookies to Legion clubs and nursing homes; they delivered approximately 300 boxes of cookies last year and have approximately the same amount ready to deliver this year.

Shelby Hanson, 12, a seventh-grader at Southwest Middle School, said she was pleased with veterans’ reactions to their deliveries.

“When they see us they are so happy that we’re thanking them for something that they did and that we have stuff to give them and that we’re even there to deliver the cookies, to be there, to be around them and enjoy it,” she said.

She said it’s nice to be able to give to veterans as they’ve given to the country.

“They’ve experienced a lot with being places, new places, and seeing things that we don’t see on a daily basis,” she said.

Marissa Hanson, 10, said it was awesome they could deliver the cookies to the veterans after they’ve given so much to the country.

Shelby Hanson mentioned someone who traveled from New Richland to thank them.

A fundraiser at Applebee’s has also helped them with their mission.

Shelby Hanson, who is a confirmation student at United Methodist Church, said she believes her faith guides her in her service to veterans.

“God, he kind of wants you to give back and do good to others, and this is exactly that,” she said.

The girls are also active with Girl Scouts in other parts of the community; Shelby Hanson has planted plants at Zion Lutheran Church and is a cadet in the Girl Scouts.

Marissa Hanson, a fifth-grader at Halverson Elementary School, is a junior in the Girl Scouts and has taken part in building bird houses and placing them on the Blazing Star Trail.

Their mother, Jennifer Hanson, said she feels proud of the difference her daughters are making at such a young age and said if they can continue on the same path, they can make a change in the world.

She said the feedback from the community and the family’s faith community has been awesome.

The girls are also donating cookies to overseas military personnel. Donations will be open until late March.

Shelby Hanson urged anyone interested in donating to call the family at 507-377-2241.