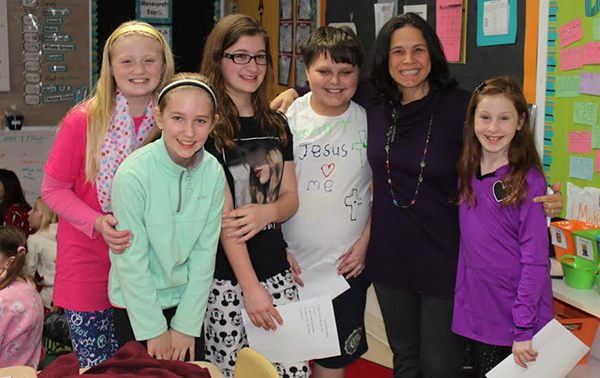 Commissioner of the Minnesota Department of Education Brenda Cassellius visits with Sibley Elementary students Friday morning during her visit to the school. – Provided

Sibley Elementary School serves as a role model for other schools in the state, according to the commissioner of the Minnesota Department of Education.

Brenda Cassellius made the comment while on a tour of Sibley Elementary on Friday in recognition of the school’s designation in September as a Reward School for the fourth time in five years.

Cassellius said the school has a “wonderful school culture and climate” and is doing great things for its students.

Her visit included a tour of the school’s facilities and a discussion with district administration.

Fifth-graders guided Cassellius on the tour and provided a brief overview of what they have learned this year.

She said Sibley Elementary has achieved Reward School status by showing great leadership at the teacher and student level, working together and establishing a sense of community within the school. 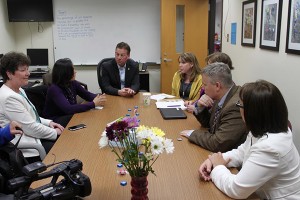 Sibley Elementary was one of Minnesota’s higher performing Title I schools, according to Multiple Measurement Rating data released by the Minnesota Department of Education in September.

Sibley had a rating of 93.1 percent on the Multiple Measurements Rating. The rating was higher than in 2014.

The Multiple Measurement Rating measures four categories: proficiency, which looks at student scoring and whether the achievement gap has lessened; growth, which measures students’ growth from one year to the next; academic gap reduction; and graduation rates at the high school level.

District 27A Rep. Peggy Bennett, R-Albert Lea, said it was nice to see Sibley be recognized. She was a first-grade teacher there for 30 years.

“Sibley is like a family to me,” she said.

Bennett said it is important to share Sibley’s culture of working together as a school across the state.

Albert Lea Area Schools Superintendent Mike Funk said Sibley’s progress is an example of the progress the district has made.

Funk said while the district has high poverty rates — and nearly half of Sibley students receive either free or reduced lunch — it consistently ranks as one of the top schools in the state.

“The hard work of our teachers and our focused curriculum is making a difference,” he said.

The visit was a part of a tour Cassellius is taking of 44 schools that have been awarded Reward School status in four or five of the past five years.