Why do we caucus in state of Minnesota? 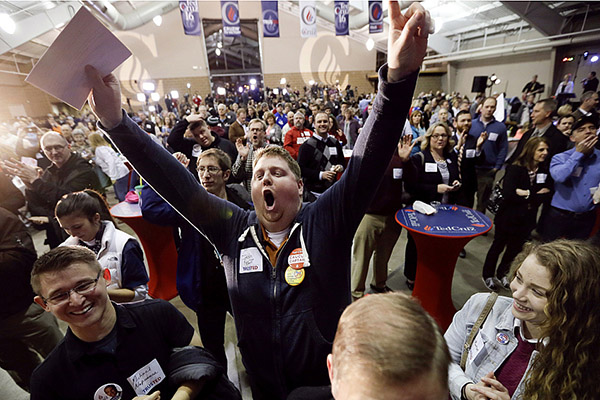 Minnesota’s party faithful will caucus on Super Tuesday  to decide who they’d like to see on the November presidential ballot and talk about issues important to them. Nine of the 12 states (plus American Samoa and Democrats abroad) voting on Super Tuesday use primary elections to choose their preferred candidates, but Minnesota is among the three that will hold caucuses.

Primaries are the more common approach for voters to declare presidential candidate preference — they use a balloting process similar to the one used in general elections. Caucuses, while specifics differ from state to state and party to party, involve a series of meetings across a state, often run by party staffers and volunteers. Sometimes that informal nature can lead to complications:

• A 2014 DFL caucus in Minneapolis ended in a fight between supporters of incumbent Rep. Phyllis Kahn and her challenger, Mohamud Noor. It was rescheduled for a later date.

• In 2012, three Republicans tied for the nomination in Iowa — the party had initially announced the wrong winner.

Caucuses can be messy and confusing compared to the more straightforward approach of the primary. Turnout tends to be low. In 2008, the last presidential election without an incumbent, about 277,000 Minnesotans turned out to caucus with the major parties — a fraction of the more than 2,900,000 who turned out for the general election. And that was a record turnout for caucuses.

Some precinct caucuses attract only a handful of people, meeting in a bare community center.

Still, Minnesota hangs on to the caucus process for determining presidential preference. There isn’t a single answer why. But understanding Minnesota’s political history can help explain why such an arcane process is still in effect in 13 states.

The state began its voting history with a caucus, then moved to a primary in 1916. When the state returned to caucusing in 1922, it established the groundwork for Minnesota’s modern caucus system, according to a report by the Citizen’s League.

The last time Minnesota held a presidential primary was 1992, when the two major political parties held a caucus and a primary election, a month apart. But when it was all over, neither party actually used the results from the primaries, said Geoffrey Skelley, associate editor of the political newsletter Sabato’s Crystal Ball.

Voters were baffled by having both options, and then-Gov. Arne Carlson called the caucus system “elitist,” giving preference to active party members over the general population. Carlson didn’t do well in the caucus system — he didn’t win the GOP’s endorsement either time he was elected governor.

Still, he had a point about the issue of low turnout.

“Minnesota has extremely high voter turnout in general elections,” said Eric Ostermeier, a University of Minnesota political scientist and writer. “If that’s something that’s important, why at this stage … would you hang on to a process which everyone knows is going to have an extremely low turnout?”

Carlson himself had some self-interest in holding a primary election — he was generally popular across the state, and would have benefited from the higher turnout, Ostermeier said.

Such is the nature of caucuses: In Minnesota, the parties run them, and they require of participants a certain level of party affiliation.

David Redlawsk, an expert on caucuses from Rutgers University, described caucuses as a ground-up, party-building activity, whereas primaries work more from the top down.

The meetings are inherently party-centric, too; Minnesota law says you must generally agree with a party’s platform to caucus with it, though in Minnesota you don’t need to be registered with it.

Not a Republican or Democrat? You could still caucus with a third party like the Green Party, or perhaps the Grassroots-Legalize Cannabis Now Party.

Would we ever abandon the caucus?

The short answer: That’s not likely, at least not in the near future.

When Minnesota first became a state, candidate selection was up to political professionals, according to the Citizen’s League study. Around 1900, reforms made the process more accessible to common voters.

In many cases, caucuses are simply the preference of political elites, Ostermeier and other political experts say. There’s tradition behind them — and they’re cheaper to run. With a caucus, there’s no need to buy expensive voting machines, rent a space for too long or pay many workers. Parties just need a room and a few volunteers for a couple hours.

That simplicity can be a source of problems, though. Take this year’s Iowa Democratic caucuses: Hillary Clinton and Bernie Sanders finished so close to tied that coin flips were used to help pick a winner in some precincts. Clinton emerged victorious, but not without a flurry of controversy.

The Des Moines Register published a scathing editorial later that week, saying that what happened at the caucuses was a “debacle, period”:

“Too many accounts have arisen of inconsistent counts, untrained and overwhelmed volunteers, confused voters, cramped precinct locations, a lack of voter registration forms and other problems. Too many of us, including members of the Register editorial board who were observing caucuses, saw opportunities for error amid Monday night’s chaos.”

Despite all this, Redlawsk, who spent much of the fall in Iowa researching its caucuses, said caucusing worked “surprisingly well” in Iowa this year. His reasoning: There are hundreds of precincts in the state, and in just a handful were results disputed. Only six precincts were close enough to resort to the coin-toss tiebreakers.

“It depends on what you think the caucus is,” Redlawsk said. “And what I’m telling you it is it’s a party-building operation about electing delegates to the county convention that runs the party.”

Ostermeier believes there are many lawmakers who would think a primary “seems more fair at this point in our political history.” And there have been attempts to move Minnesota to a primary in recent years, but none of the efforts got very far. In 2008, Dan Larson, a former DFL state senator, sponsored a bill that would’ve required Minnesota to hold a presidential primary.

Power to change the nominating process remains in the hands of party leaders. At this point, though, there’s not much pressure on them to change anything. So it’ll be Caucus Day in Minnesota once again on March 1.