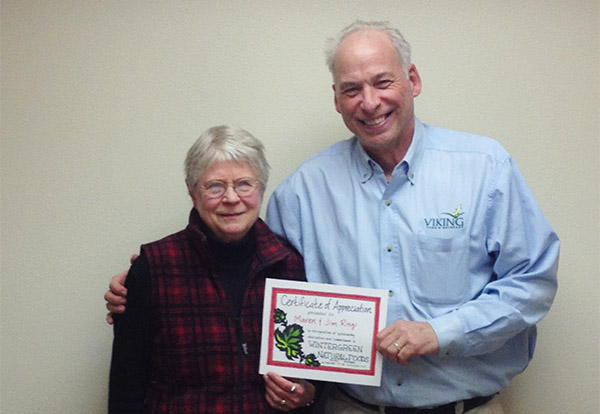 Maren Ring and Tom Ehrhardt are presented with recognition awards at the 40th annual meeting of Wintergreen Natural Foods membership for their many years of service and commitment. -Provided

The annual meeting of Wintergreen food membership was Nov. 17 at First Methodist Church in Albert Lea. Thirty-five members were in attendance. Articles of incorporation and bylaws were updated.

Interim President Tom Ehrhardt called the meeting to order. Along with the updates of articles and bylaws, a new board was formed as well as new terms.

According to a press release, the meeting also honored the long service of board members and employees. A hand painted recognition plaque was created by artist Shanda Meyer and given to Sara Aeikens and Maren and Jim Ring to commemorate 40 plus years; Connie Bolton for 27 plus years and to George Ehrhardt and family. Honorable mentions were given to Linda Kuehn for nine years of service and Kim Barr for two years of service.

Wintergreen Cookbooks from the 7’s plus a scrapbook were available for perusing.  Memberships are also available.