Freeborn County Sheriff’s Office deputies arrested a Wisconsin man Tuesday night after a chase that started near the intersection of East Main Street and William Avenue.

Joshua Wade Shawley, 25, of Melrose, Wisconsin, is facing charges for fleeing in a motor vehicle and driving while intoxicated, pending the results of a blood draw for controlled substances.

Shawley was arrested after deputies attempted to make a traffic stop for an equipment violation, according to a news release. 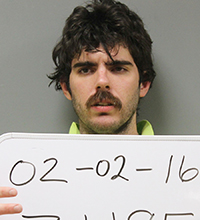 Shawley reportedly did not stop for the deputy, who had his emergency lights and siren activated.

Another deputy set up stop sticks at the intersection of West Main Street and First Avenue. Shawley reportedly hit the stop sticks and flattened all four tires but continued on without stopping.

The vehicle came to a stop in the middle of West Main Street near U.S. Highway 69, but as officers and deputies gave commands to the driver, he again fled.

He came to a stop for the final time at the same intersection.

He was arrested and taken to the hospital for an evaluation before being transferred to the Freeborn County jail.

The Sheriff’s Office stated the highest speed in the short pursuit was about 30 mph.