Women’s ensemble to perform as part of ongoing concert series 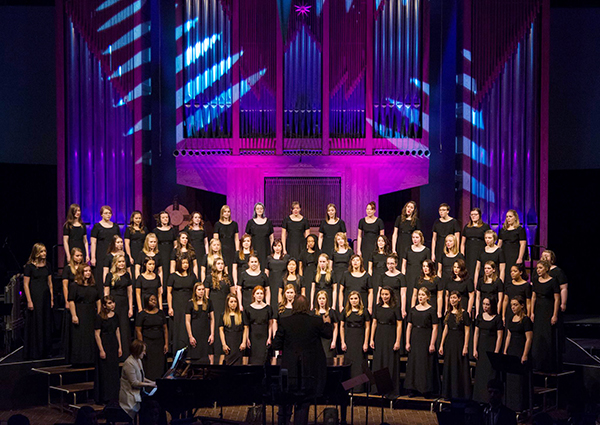 Carthage Women’s ensemble, under the direction of Peter Denee, will perform this week in Albert Lea. – Provided

An ensemble of 50 to 60 women from Carthage College in Kenosha, Wisconsin, will perform in Albert Lea on Thursday as part of an ongoing concert series at First Lutheran Church.

It will be the second time a choir from the college has performed in Albert Lea.

Carthage Women’s Ensemble is under the direction of Peter Denee. The group performs on and off campus at the college and tours regionally, nationally and internationally. The choir recently received an invitation to sing at the North Central Division American Choral Directors Association conference.

“We’re trying to find opportunities for the community to come together from an arts and culture standpoint in a spiritual place,” said Tim O’Shields, minister of music and worship at First Lutheran, about the upcoming concert.

O’Shields oversees the church’s choirs, including an adult choir, two children’s choirs, a handbell choir and a contemporary choir, among others. He also plays the organ at the church and helps organize a nondenominational children’s music camp in the summer.

O’Shields said when he first moved to Albert Lea about three years ago, he wanted to establish a concert series. Since then, the church has hosted a Swedish youth choir, a Chinese pianist, a Brazilian organist and a clarinet soloist, among others.

He said he met some of the people from Carthage College about two years ago, and the college’s full university choir has already performed in Albert Lea.

He hopes the concert series will keep people from having to drive 30 or 40 minutes away for more entertainment options.

“Albert Lea has been so supportive and so kind and just loving on every level with everything we’ve tried to do here — be it concerts or programs at the church,” O’Shields said.

He said he could try to bring the same concerts to other communities — even larger cities — and not feel the support of the people like he has in Albert Lea.

Carthage Women’s Ensemble is made up of students ranging from their first year to last year in college.

O’Shields said the college is regarded as one with a high musician standard.

The ensemble has a wide repertoire and will perform everything from spiritual selections to classical music, with some lighter songs thrown in between.

Donations will be accepted, though the event is free to attend.