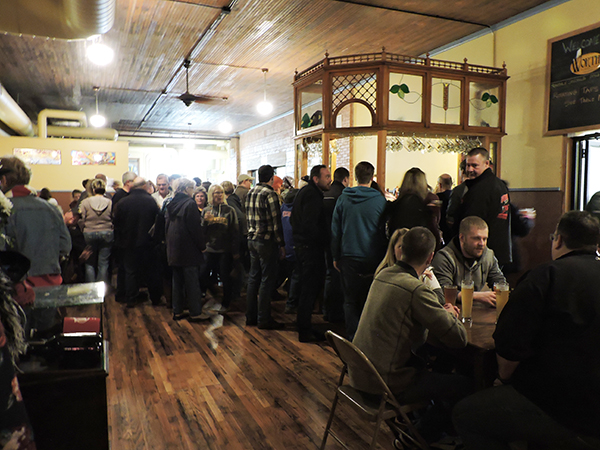 There wasn’t an open seat in the house during Worth Brewing’s grand re-opening. – Kelly Wassenberg/Albert Lea Tribune

NORTHWOOD — Worth Brewing Co. hosted a re-opening Saturday night in its new facility at 835 Central Ave. in Northwood.

“The place was packed from noon to 11 with some customers driving from Iowa City and others from Minneapolis and Des Moines just to show their support. Well, and maybe to drink some beer.”

The new facility, which is housed just across the street from the former location, was restored during an 11-month renovation project.

The front of the tap room features a stage for live entertainment, and the bar has a window into the brewery, allowing customers to see how their beer is made.

Christian Burnes came down from Minneapolis to enjoy the grand opening with some friends, including local Trent Midtgaard of Northwood.

They were both enthusiastic about the larger space.

“I love it,” Midtgaard said. “It’s nice and really open. It’s a lot better than the old — little place they had before.

Both of the men were return customers, but there were plenty of first-timers as well, according to Trenhaile.

“We are so thankful to be open after all of the hard work put into restoring the 1886 building, while building a state of the art brewing system inside,” Trenhaile said. “Now we get to use the new location to expand our monthly events.”

These events will include open mic nights, pub quizzes and beer clinics. The facility will also have specials most days of the week. Information on the company’s events will be posted on its website at worthbrewing.com.