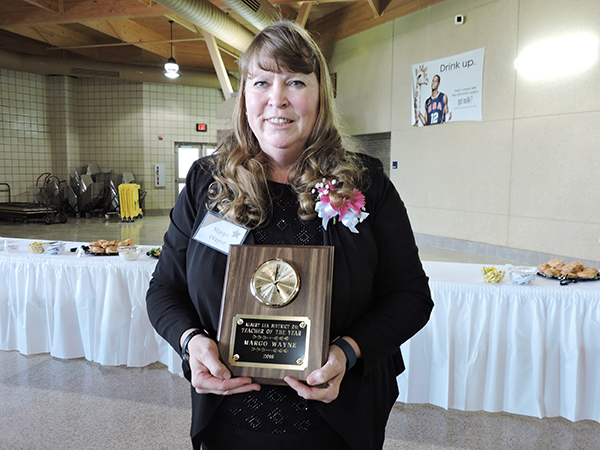 The announcement was made by School Board Chairman Mark Ciota during the Teacher of the Year reception Wednesday afternoon in the Albert Lea High School ­commons area.

Wayne has been nominated for Teacher of the Year a total of seven times since 1998. This is the third year she has been a finalist for the award. Other finalists for the award included Crystal Barclay, Rebekah Crissinger, Kevin Gentz and Kristin Hunnicutt.

“There are so many teaching in the district that deserve that award,” Wayne said after the ceremony. “It’s always a blessing to be nominated. It’s always an honor. It’s a humbling experience.”

Wayne has been a teacher with Albert Lea Area Schools for 39 years and received her master’s degree in education through St. Mary’s College in 1992. She is currently the assistant cross country coach and has previously held the position of girls’ track coach and B squad volleyball coach. She has also served as the Big Nine Conference girls’ track and field representative and has served on several athletic committees during her tenure with Albert Lea High School.

She was a first-year inductee on the Wall of Inspiration at Albert Lea High School. She was Big Nine Track Coach of the Year in 1981 and 1993 and Section Track Coach of the Year in 1993. In the fall of 2015 she received the ALHS traveling trophy recognizing a teacher’s years of service to students at the high school, and in 2009 she received the 4-H Outstanding Adult Leader Award from the Freeborn County Extension Agency.

“I was going to ask if they had written this right because I was kind of concerned,” Wayne said as she accepted her award. “I thought the only way I was going to be up here was a five-way tie with everybody, so I am simply blown away.”

During her speech, she expressed her gratitude toward the members of the Teacher of the Year Committee, her colleagues and her family.