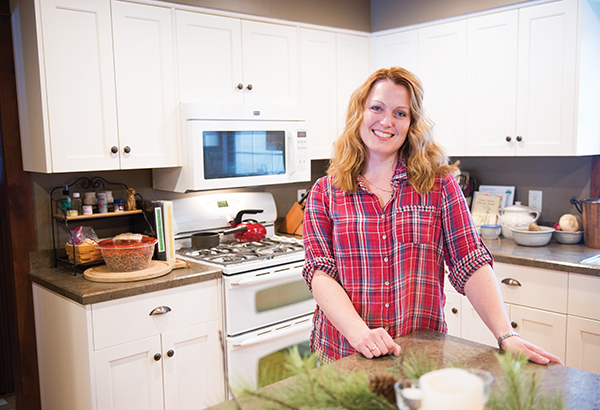 Johnston said she uses the Google calendar on her phone to help her stay organized. – Colleen Harrison/Albert Lea Tribune

Every mom has her tricks of the trade to make her job a little bit easier. For hockey mom Angie Johnston, it’s keeping organized.

Whether it’s finding time to spend as a family, fixing dinner and picking up and dropping off her children at school, hockey practice or games, there’s a lot to keep track of.

Johnston, a stay-at-home mom in Albert Lea, utilizes a chalkboard at her home to help remind everyone of the schedule for that day, whether it be hockey practices for one of her three boys — Hayden, 14, Adler, 11, or Bryant, 9 — or something else that needs to get done that day.

“If we have little chores or things that I need help with or they have thank you notes they need to write, I’ll put a little note up there so they’ll be reminded to do it,” she said. 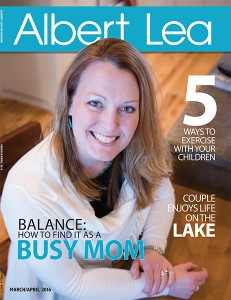 See this and other stories in the March/April issue of Albert Lea magazine.

She said the board helps alleviate the need for anyone to have to question the day’s schedule.

“They can just refer to the board,” Johnston said. “That’s been kind of helpful.”

Another valuable asset Johnston uses to keep organized is her iPhone.

“Google Calendar is amazing,” Johnston said. “We color code each kid on the calendar so we can see who’s going where and who’s driving where and those types of things.”

“I’m kind of quirky-weird that way,” she said. “I do like to organize. It helps me keep track of where I’m going and what I’m doing, and it allows me to sometimes — when I feel like I’m in a really big hurry or a rush — to prioritize what needs to be done and what can maybe be pushed to the next day.

“I think prioritizing what is important is really key, and then if you know kind of what your order of importance is then it’s easy to let other things go,” she said.

In the middle of a busy schedule, she said she thinks it is important to schedule downtime.

As a stay-at-home mother, she is fortunate to sometimes do this while the boys are in school.

“If I was working full time, that would be really a big challenge, so we are very blessed with that,” she said.

“There is a lot of shuttling, lots of taxi driving,” she said. “It’s just kind of the regular hockey mom stuff — getting your kids to and from the practices, to and from the games, and any extra things around tournament time. Just keeping track of everybody’s schedule this year has been kind of interesting this year with three traveling teams, but we make it work.”

To keep fees low with the hockey association, parent involvement is a requirement. This can include working concessions or helping with the scoreboard.

Johnston also volunteers as a room parent and at Grace Lutheran Church, where she sings and helps with confirmation classes.

Despite the routine that keeps her busiest from 3 p.m. to bedtime, Johnston still feels it’s important to find time to spend together.

“In the evening we try to have a meal together, too, just because it gives us a time to touch base, just be together,” she said. “Even if it’s quick and someone’s running off to practice quick or whatever.”

Coordinating meals together can be quite difficult during the hockey season, though, as the older boys sometimes have practice four or five times a week and games a couple times per week.

“We’re usually running out to the arena a few times per night,” she said.

The boys are also active in football and golf.

Amid the chaos, Johnston has been known to make extravagant cakes to celebrate special occasions with the family. They started out as her taking ideas from magazines and have blossomed into requests, such as a truck that looked like Mater from the movie “Cars.”

“It’s just kind of evolved,” Johnston said. “I haven’t taken any cake decorating classes by any means, but I like to do creative things.”

Special things such as making a unique cake are how she chooses to be a mom.

“I think we all have different ways as moms that we show our love,” she said, noting that not everything has to be over-the-top and unnecessarily complex.

“Sometimes it’s the things that you don’t even realize are really important,” Johnston said. “You know the small little gestures — the picking them up from school and asking them how their day is is just as important as baking them a big cake. Just the day-to-day thing — being around, listening, valuing what they’re saying and what they’re experiencing.”

In Johnston’s case, she credits strong role models for helping her become the parent she is today. Her grandmothers were just a few that she mentioned alongside her parents.

“Mom and Dad were always very supportive and always there to listen, there to care and laugh,” she said, noting she is still close to her family.

“I think no matter what kind of role models you have or who you’re around, you’re just out there doing the best you can and some days you’re lucky to make it to bedtime,” she said. “Some days are just hard, but you keep going, and it’s worth it.” 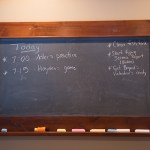 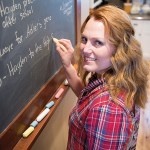 Johnston puts each of her children’s schedules on a chalkboard in the family’s kitchen each day. – Colleen Harrison/Albert Lea Tribune 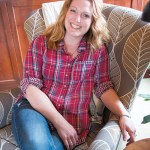 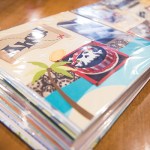 Like many moms, Johnston likes to create scrapbooks for each of her children. – Colleen Harrison/Albert Lea Tribune 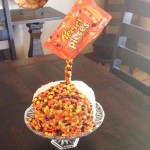 Johnston used frosting and wooden skewers to create the effect of Reese’s pieces being poured out of the bag and onto the cake. – Provided 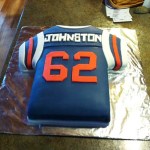 Johnston has received no formal training in cake decorating. – Provided 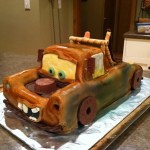 One of her Angie Johnston’s boys requested a cake of the character Mater from the “Cars” movie. -Provided