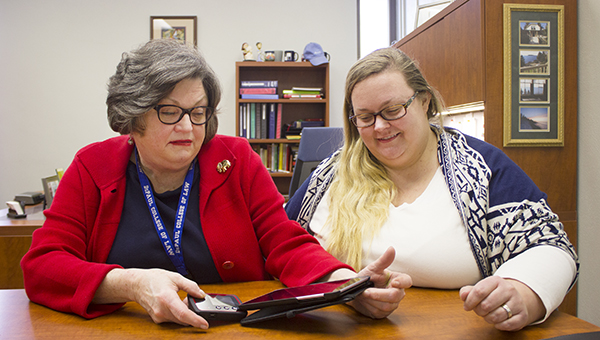 Library Director Peggy Havener said the program will give users free access to digital resources that otherwise would not be available, close the gap in Wi-Fi access and create new opportunities. The program will be one of the first of its kind in Minnesota.

“We have to have a computer-literate community in order to enjoy a lot of this,” she said. 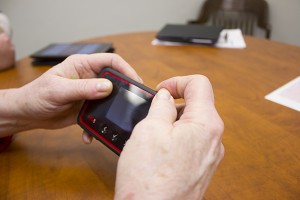 The hotspot is turned on by pressing on its upper right side. – Sam Wilmes/Albert Lea Tribune

Library staff will distribute 15 devices and 10 tablets later this month in the project’s pilot plan; people interested in being a part of the program can begin submitting applications Wednesday. Library officials will contact the selected participants March 24.

Users will be able to have the device for three weeks and must be 18 or older, have a library card in good standing and be a Freeborn County resident.

The pilot project, funded by the Albert Lea Public Library Foundation, will allow the library to identify gaps in Internet service throughout the county, improve the program and apply for grants and donations.

Completing the pilot program will allow library officials to submit a grant application for the project’s expansion and examine public interest.

Library officials cited a website that estimated 21 percent of the population in Albert Lea is not connected to the Internet at home or elsewhere.

Officials conducted an Internet use survey in January and found 45 percent of respondents were somewhat or very likely to checkout a Wi-Fi hotspot device from the library.

Havener said the program is critical for job applicants because most job applications must be filled out online.

“Based on what we learned from them and our recent survey results, we are confident that the hotspot lending program is the right step to take to bridge the digital divide in our community,” she said in a press release.

She expects the program to fit the community and be used in different ways.