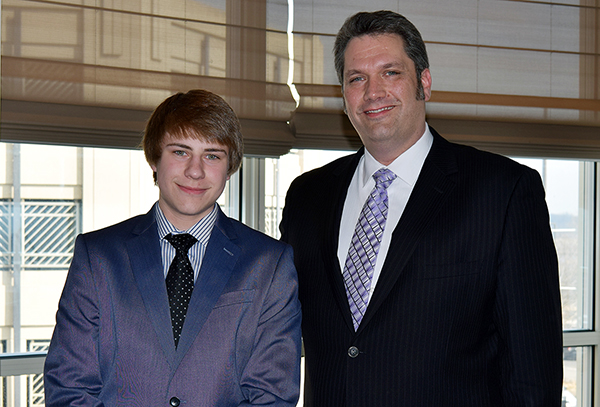 Candidates for the scholarship must demonstrate excellence in the classroom, actively participate in intra- and/or extra-curricular activities and serve as a role model for his or her peers. The scholarship recipient must also share the AMC vision of a future that contains active civic participation, community pride and a sense of community responsibility. The scholarship is made possible through donations made during a silent auction at the association’s annual conference each December.

Christianson currently has a 4.055 GPA with a class rank of 27 out of 218.  He has lettered in both cross country and tennis, is a guitar player, and holds a purple belt in taekwondo.

“As the immediate past president of AMC one of the great things that I get to do is select an outstanding high school student from Freeborn County to receive the AMC Student Scholarship Award,” Shoff said.

Shoff said that part of Christianson’s application essay that really struck him was how he and his family volunteered following the 2010 Freeborn County tornadoes, making hundreds of sandwiches for displaced families, workers and volunteers who were helping those most devastated in their time of greatest need.

“I was also impressed that Nicholas’ essay expressed his gratitude to his parents for working so hard to give him a good start in life and how he feels it is his duty to make the most of it,” Shoff continued.