Auditor: Minnesota’s teacher licensing in need of an overhaul 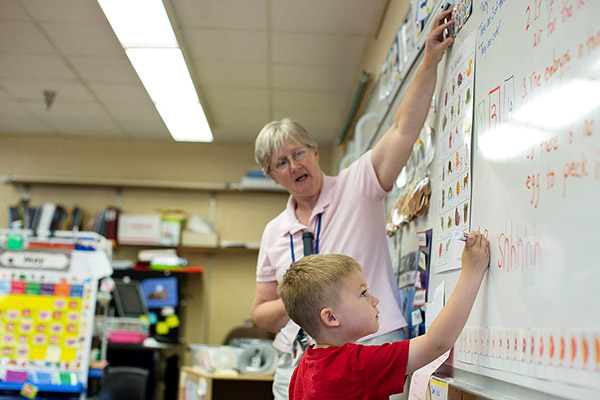 Lawmakers have been pressuring the Minnesota Board of Teaching to move faster on adopting new, streamlined rules for licensing teachers from out of state. Here, a student writes on the board in teacher Janet Callahan’s pre-kindergarten class at Apple Valley’s Westview Elementary.- Jennifer Simonson/MPR News

Teacher licensing in Minnesota is “confusing,” “broken” and in need of an overhaul, the Office of Legislative Auditor said Friday.

The system’s problems are partly to blame for the state’s teacher shortage, and the fact that the work is split between the Minnesota Board of Teaching and Minnesota Department of Education makes it difficult to hold anyone accountable for decisions, according to the auditor’s report.

The Education Department also doesn’t do enough to explain why it denies license applications and the teaching board’s appeal process “is not consistent with the law,” the report said.

Erin Doan, the teaching board’s executive director, said the board agrees with the new report’s findings.

Minnesota lawmakers have been pressuring the teaching board to move faster on adopting new, streamlined rules for licensing teachers from out of state.

Legislative Auditor James Nobles is recommending teacher licensing be consolidated under one state agency. His report also notes that licensing laws change too frequently and are not clearly written.

Education Department and teaching board officials told the auditor they agree with the evaluation’s major recommendations. The teaching board said it is already rewriting out-of-state licensing rules in response to a law passed last spring.

Many of the report’s recommendations point to the Legislature. Lawmakers are the ones who could consolidate licensure under a single agency, and restructuring the entire licensure system as the report suggests would also be a legislative action.

“The analysis has to, as I said earlier, be thoughtful and it has to involve some deep thinking, and that takes time,” she said. “And we’re moving into a campaign season when legislators think about other things than probably major changes, so I do want to go very slowly.”

Erickson supports consolidating the licensing under a single agency eventually. In the meantime, she said the Board of Teaching and the Department of Education need to finish addressing problems from many current applicants.

The board suspended an alternative form of licensing in 2012. It has since re-started that process, but is facing a lawsuit from a group of out-of-state teachers who say they were unfairly denied licenses. That lawsuit is still ongoing.