Author encourages students to have fun with their writing 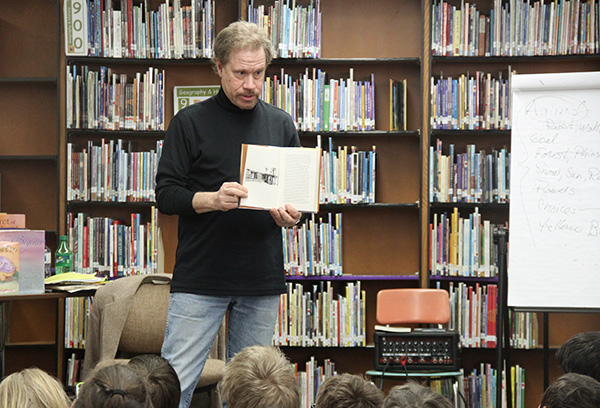 Lakeview Elementary School students got a first-hand peek at what it takes to become a successful writer Tuesday from an accomplished author and musician.

Douglas Wood, who has published 32 children and adult books and speaks all over the country, said it did not always come easy for him.

When he was younger, Wood said, he was the slowest reader in his class. He got in trouble a lot and had to stay after school for extra help. It was only a few years ago he found out he has attention-deficit hyperactivity disorder and dyslexia.

Eventually, despite these challenges, he said he became a good reader, though he still doesn’t consider himself to be a fast reader.

He wrote his first book at age 39 and has since sold over 2 1/2 million copies of his books in print. “Old Turtle” and “Grandad’s Prayers of the Earth” are among his best known works, and he is in the middle of six new books.

“Writing is creative; it’s fun,” he said. “Don’t worry about being perfect.”

He encouraged the children to not get stuck in their writing and noted that sometimes the hardest part of writing is getting started. Once you get started, continue with it until you finish it and then go back and edit, he said. 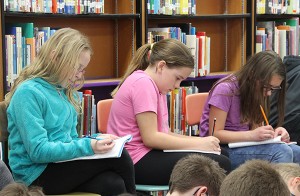 Eleven-year-old Pal Wal said he liked hearing from Wood that everyone makes mistakes and that not everyone is perfect.

Hannah Willner, 11, said she learned how to be a good writer from Wood.

In addition to his work as an author, Wood plays multiple instruments and is a guide for wilderness canoe trips. He and his family live in a log cabin in the pines by the Mississippi River.

On Tuesday in front of a group of fifth-graders, he played a song called “Little Blue Ball.”

Eleven-year-old Tim Chalmers said the highlight of the visit for him was the song, which talked about taking care of the earth.