Business owner knows the ins and outs of pianos, organs 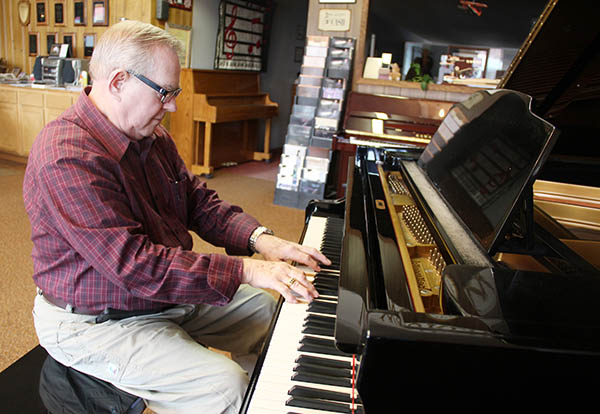 NORTHWOOD — An area man is celebrating a milestone in the music business this year.

Duane “Dewey” Kruger, owner of Dewey Kruger Music in Northwood, has had his business for 35 years but has been in the industry for 50.

Kruger said he started out in the music business as keyboard division manager at Carlton-Stewart Music in Mason City in January 1966, before he and his wife moved to an acreage outside of Northwood in November 1978. In November 1981, they started Dewey Kruger Music at 715 Central Ave. in Northwood, in the home of a former plumbing shop.

The store carries a full line of keyboard instruments including Kawai acoustic and digital pianos and Young Chang pianos, along with Kurzweil and Roland digital keyboards. The store is the exclusive area representative for Rodgers Instruments in Oregon.

Kruger said he has always been involved with music to a certain extent — though he has not had very formal training. Most of his training came on the job.

When he was 11 years old, he took piano lessons for a year, but at the end of that year, his teacher told his father he might as well save his money from the lessons. But that didn’t stop him.

Soon after, he learned how to play an accordion, and when he was only 14 years old, he started with a six-piece band.

Today, you would never know by listening to Kruger that he didn’t have more than that one year of formal piano training. He plays the instrument with ease and skill, and he knows it inside and out.

In addition to pianos, Kruger works on organs.

“It has been a lot of fun,” Kruger said. “I’m looking forward to the next 50 years. I have no designs on retiring.”

He said his favorite part about the business has been the people he meets.

“Over these years, I’ve met a lot of nice people,” he said.

Outside of the music business, Kruger is interested in vintage John Deere tractors.

He said he used to enjoy golfing and fishing and helped with a variety show in Kensett for almost 30 years on a weekend in the first part in April.

He has taken part in a call-in show with Tim Fleming of KGLO AM-1300 at 8:50 a.m. every Thursday since January 1982. On the show, he not only talks about his business, but also discusses current events as well.

Dewey Kruger Music can be found online at deweykrugermusic.com.

Interesting fact: Kruger and his wife have eaten at Casa Zamora in Albert Lea every two weeks since 1978.