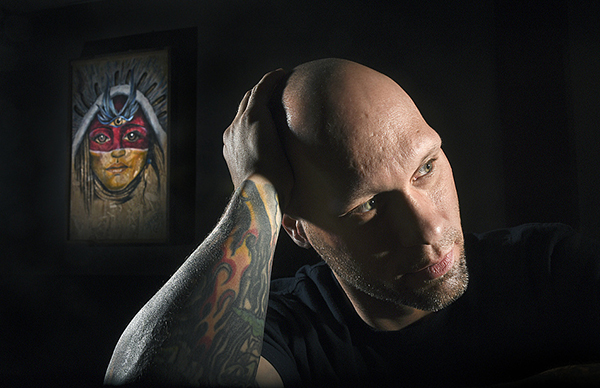 “The money is just a number. What I really want is my life back,” said 38-year-old Michael Hansen at his tattoo shop, Kinship Collective Tattoo, in Northfield. Hansen is one of the first people under a new Minnesota exoneration law to qualify for financial compensation for time spent locked up. – Richard Marshall/ for MPR News

Michael Hansen vividly remembers the day police surrounded his workplace and led him away in handcuffs amid a shocking allegation — that he’d killed his infant daughter.

“The day I actually walked out those doors, I hadn’t seen sunlight in months,” Hansen said as he recounted the story. “I was squinting towards the sun and I just remember seeing my mom and feeling my feet across that pavement. I actually remember looking out and not seeing a fence. It all just kind of hit me at once.”

While a judge granted his freedom, Hansen now wants something more. He’s among the first Minnesotans requesting compensation under a 2014 law that lets people imprisoned for a crime but later exonerated seek payment from the state for their pain and suffering while locked up.

A special panel appointed by the chief justice of Minnesota’s Supreme Court has already calculated the awards for Hansen and two others. Lawmakers must now decide whether to pay. If they do pay, they must also find the money since the law did not earmark funds.

The process is still unfolding at the Capitol. State Sen. Ron Latz, DFL-St. Louis Park, the compensation law’s sponsor, is authoring this year’s bill to approve the first three payments. It could become part of the bigger budget surplus debate or be routed through a separate claims process that isolates it as an issue.

The law allows those wronged to seek damages of up to $100,000 per year imprisoned and additional costs for emotional and physical injuries. Hansen’s seeking $919,000. Roger Lee Olsen, who

was imprisoned on a rape conviction that was later thrown out when the person who accused him recanted, wants $475,000. Koua Fong Lee, whose vehicular homicide conviction was overturned after his lawyers argued a mechanical malfunction was to blame, is in line for $395,000.

While the direction of the payments legislation isn’t entirely clear, Latz said the money would send an important message.

“We recognize that society has wronged them in an important way, deprived them of their freedom when they should have never been deprived,” he said. “It’s time to make our recompense and this is the final piece of the process.”

State Rep. Tony Cornish, who leads the House committee with oversight over the criminal justice system’s budget, voted for the exoneration law and says that makes him inclined to support the three awards.

“It could have been a lot higher I suppose or lower,” said Cornish, R-Vernon Center. “I don’t know if there’s a good objective way to assess how much a person’s time away from home is.”

Despite that support, the need for a legislative vote has stirred some worry. Olsen’s attorney, Steven Meshbesher, said his client is still nervous about a system that has let him down in the past. The state could be exposing itself to state or federal lawsuits if lawmakers don’t come through, he added.

“We have followed exactly to the T what they wrote,” Meshbesher said. “We’re doing to a T exactly what they said we needed to do, and we’ve done it.”

Hansen says it’s less about the money than getting accountability.

He was charged and convicted of Avryonna’s 2004 death. That medical examiner testimony was later called into question by other forensic experts assembled by the Innocence Project of Minnesota.

They concluded the baby’s head injury occurred days earlier when her car seat fell from a shopping cart, and they said the likely cause of death was positional asphyxiation as she slept.

A judge granted Hansen a new trial and ultimately his freedom when prosecutors declined to retry the case. By then, Hansen had served five years, six months and three days of a 14-and-a-half year prison sentence. He would start years of rebuilding his life and sorting through the emotional scars that remain with him today.

Hansen was 27 years old when he was arrested and is 38 now. He tends to the tattoo and piercing business he now owns in Northfield’s historic downtown. He is engaged to be married. But he can’t help but think about the interruption in his life that left him perpetually scared for his safety behind bars and separated him from another child.

The first chunk of money, he said, will go to his parents to repay them for the $100,000 in legal fees they devoted to fighting for their son.